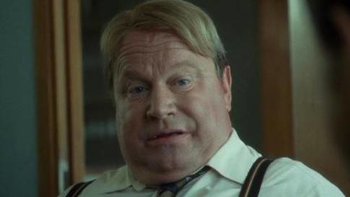 the loathsome Evert Bäckström, as portrayed on Swedish television by Claes Malmberg. Note the unconvincing wig.

Evert Bäckström is first introduced as a minor character (and black comedy relief) in the novel Between Summer's Longing and Winter's End — The Story of a Crime (Mellan sommarens längtan och vinterns köld), dramatised for TV as En Pilgrims Död. He also appears in the sequel Another Time, Another Life (En annan tid, ett annat liv).

The novels in which Evert Bäckström features as a central character are:

Between Summer's Longing and Winter's End was dramatised for TV as Death of a Pilgrim (En Pilgrims Död), with Claes Malmberg as Evert Bäckström. The novels also inspired an American TV series, Backstrom, in which Rainn Wilson plays Lieutenant Everett Backstrom, a Portland detective.

Tropes present in the novels include;