Fanfic / The Secret Life of Dolls 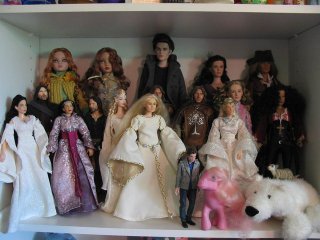 The Shelfians
1) "It's this girl who usually writes about movies and books and stuff but she also likes dolls, who are generally movie-related, and she wrote about the dolls a couple of times in passing as if they were real, and then one day she started writing about them picking out other dolls because she thought it was funny, and then it developed into a multi-fandom Soap Opera that she writes for fun, and some of the dolls are in love with each other and some of the others want to kill each other and one of them has a My Little Pony ranch. He's a sparklepire!"
Advertisement:
2) "It's this girl and she's out of her mind, basically."
—Cleolinda Jones, How to explain Secret Life

The Secret Life of Dolls is an ongoing dollfic written by Cleolinda Jones (of Movies in Fifteen Minutes internet-fame).

It started out as a comedic short starring her (at the time) small collection of dolls. As it got more installments, the plot became more complicated. A big part of it was due to readers being generous, buying Cleo more dolls to use in the story. This led to a mini Creator Breakdown. She eventually had to ask readers (very apologetically) to only send in props, since the number of characters had become overwhelming to write for and she was uncomfortable with getting such expensive gifts.

The story and humor is almost solely character-based. Although the dolls are similar in personality to the movie/book characters they are based on, they each are clearly unique from them (perhaps with the exception of Tonner Edward). Cleo says in story that she doesn't know what point in the timeline of their source material the dolls are from, so it's all pretty loose.

Secret Life has to be one of the most fun fanfics out there, and it's somewhat addictive. You can start reading it online

. It now has a character sheet in construction.