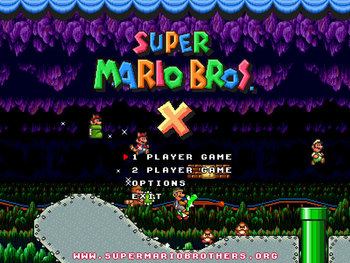 The game was first released in 2009 with the Editor and default episode “The Invasion”, which served as a showcase of the editor’s capabilities and a fully-fleshed out Mario adventure in its own right. It would continue to receive official updates from Redigit up until 1.3.0 towards the very end of 2010. At one point in 2010 The Invasion was replaced with three new default episodes: “The Invasion 2.0”, an updated version of The Invasion that showcased the vastly ramped up new features of the Editor, “The Princess Cliche”, and “The Great Empire”. Development officially ceased in 2011, though the community around the game remained active.

Due to the legal circumstances explained above, we can't really provide a link to the download, but a quick Google search should do the trick.

Note: please only include tropes related to the engine itself, and the official episodes released from the old SMBX site. Games made in this engine, should they have enough unique tropes of their own, should get their own page.

Make a Good Level X has its tropes on its page.

"The Invasion 2" contains examples of: