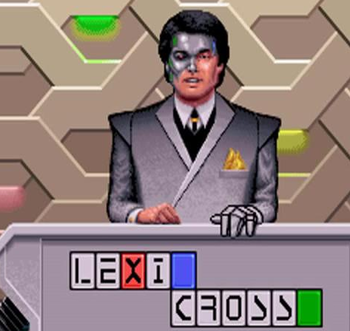 Lexi-Cross was a TV-style game developed by Platinumware for MS-DOS and released in 1991 by Interplay Entertainment. It received a 1992 port to the Apple Macintosh by Silicon & Synapse, the company later known as Blizzard Entertainment. This game was a futuristic hybrid of Wheel of Fortune and The Cross Wits, with a little bit of Double Exposurenote a 1961 game show on CBS. The game could be played Living vs. Living, Living vs. Robot or Robot vs. Robot.
Advertisement:

Each player controlled a 150-tile game board, with intersecting words hidden on it. The game boards appeared side by side; between them was the robotic hostess, Robanna Silver, who acted as a cursor for revealing tiles. Both boards had the same words on white letter tiles, in different positions, along with:

When the player felt he had revealed enough white letter tiles, he could spin the wheel, which appeared at the bottom of the screen. If the spinner landed on a number, the player could pick a consonant, and receive points based on how many tiles with that consonant were revealed to that point. Wherever two words intersected, the tile turned red and counted double. Vowels had no point value, but still could be helpful.

Lexi-Cross had four different puzzle types: Common Theme, Literal (where the puzzle words formed a quotation or title), Which Puzzle Word and Missing Word. To win the round, the player had to give the correct solution to the puzzle. After three rounds, the player with more points played a Bonus Round, where the player's score determined the amount of time for picking consonants and the number of vowels that could be chosen.