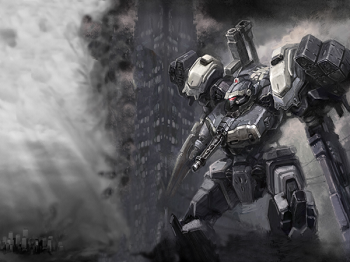 sums it up for us
Advertisement:

The Giant Mecha Roleplay of NationStates.

Gama started out as an attempt to create a Roleplay based in an original Anime setting. Most of the Worldbuilding was done by a large group of people, and the end result is a compromise between the group that wanted "Teenagers fighting zombies" and "Giant Mecha". The plot, in short, is something like this:

In the year 2020, a Russian engineer named Vlad Harmanov invented a massive war machine, which he called an M.G.W. (Mechanical Giant Warrior). He eventually gave his idea to the Russian government in hopes that they would share it with the rest of the world. However, the Russian government saw it as an opportunity to be one step ahead of the US, so they kept it to themselves. Because the Russian government did not honor his wishes, Vlad moved to the US and created a better mech. He was eventually able to get the United States to share his mechs with the world. Eventually, due to the great power of these mechs, The United Nations decided that they would be used only by a single organization. The organization is today known as Gama. Gama is an international security and intelligence organization which specializes in the use of these mechs, now called VALKs. The machines are far too complex to be used by a single human pilot, but advancements in nanotechnology were able to solve the issue by making the pilots and the machines into one entity. The nanotechnology that merges the human with the mech must be used before the individual hits puberty. It also only works with people who are AB+. Those who have been made VALK pilots by Gama are called Valkyries.

In January of 2050, a new virus began to spread. It started out with a few individuals experiencing strange symptoms in China, India, The United States, Russia, Australia, Nigeria, The United Kingdom, and Mexico. Nobody knew how these individuals got this virus, nor did doctors know what to do about it. After a few days of feeling the affects of the virus, all the people felt perfectly fine. Because of this, most of them were released from the hospital. Bad idea. The next day, people in all of the above countries reported getting bitten by the same people who were said to be sick with the new virus. In a few hours, the people who had been bitten became zombified and began attacking people as well. The virus is now quickly spreading to other countries.

To make matters worse, a rogue religious extremist group (assumed to have originated in Europe) known as Proteus, began attacking resistance camps and research facilities. The United Nations has reason to believe that Proteus was responsible for starting the spread of the virus in the first place. The United Nations and Gama are now working to stop Proteus and rid the world of this deadly virus before all humans are turned into zombies.

The Roleplay itself can be found here