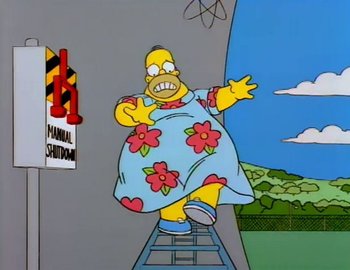 The nuclear power plant's safety at its finest.
"The heat of the sun has melted through the navigation system. You will need to manually navigate it into the aperture."
— H.U.E., Final Space, Chapter 8
Advertisement:

Many mission-critical vehicles, machines, or devices operate autonomously under the control of a Master Computer, requiring little to no human intervention during routine use. When said device experiences a catastrophic Plot-Driven Breakdown, a human will inevitably need to activate an Override Command to save the day. Unfortunately, Genre Blind designers will often mount the manual controls in a hazardous or completely inaccessible location, never expecting them to have to be used.

In most cases, the task is extremely risky and the plot will feature the characters' attempts to activate the override without harm to themselves. If the task is guaranteed to be deadly, see Someone Has to Die.

When a bomb doesn't go off as planned and prompts a character to go after it for a manual detonation, see Unplanned Manual Detonation.