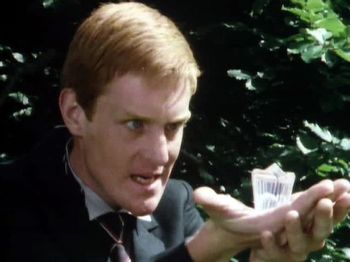 Turlough tries desperately to win a Staring Contest with a salt shakernote and, no, we're not referring to a Dalek this time.
"In the name of all that is evil... I, the Black Guardian, order you to DESTROY THE DOCTOR!"
— The Black Guardian, in one of the more hamtastic lines of Classic Who
Advertisement:

The one where JNT fanboyed so hard about the Queen, he completely knackered the timeline of U.N.I.T. in the process.

Brigadier Lethbridge-Stewart has retired to teach maths at a boarding school in the English countryside, but he has his hands full there, too. Two schoolboys steal his car for a joyride; when it crashes, one of them — Turlough — has a vision of a man dressed all in black. It's none other than the Black Guardian, who, still burnt over that whole Key to Time thing, offers Turlough his heart's desire — passage off Earth (and back to his home world) — and all he has to do is kill some guy named "the Doctor"!

Aboard the TARDIS, Tegan is still freaking out over her experience with the Mara. Nyssa and the Doctor try to reassure her, but they aren't at it for very long before they nearly collide with a ship that looks oddly like a pointy clamshell. The Doctor avoids a collision only by dematerializing the TARDIS and rematerializing it aboard the other ship.

The clamshell ship is gaudily decorated in a sort of Art-Deco-by-way-of-Vegas way, but there's no one aboard, and nothing happening except that a teleportation capsule is listed as "en route". It contains Turlough, who sneaks into the TARDIS just in time to encounter the Doctor returning, whereupon he tries to look innocent in an "Oh, was this your spaceship?" way. For some reason, this works, and the Doctor enlists him to help figure out what the deal is.

Unfortunately, after the Doctor and Turlough leave for 1983 Earth, the TARDIS randomly decides that 1977 would be a great time to visit. Nyssa and Tegan wander around 1977, wondering what's going on; meanwhile, in 1983, the Doctor and Turlough eventually run into the Brig, delighting the Doctor but freaking the hell out of the Brig, who says he's never met him and doesn't know nothing about no aliens, and would he please quit babbling about UNIT because it's a top-secret organization. Now we know where Torchwood learned how to fly below the radar. The Brig's memory is eventually jogged, and he confesses to having had a nervous breakdown six years ago. Shortly after meeting a young Australian woman named Tegan.

Tegan, in 1977, finds 1977-Brig and brings him back to the TARDIS, where there's a badly burned guy they think is the Doctor. (It isn't, as is shown when the action cuts back to the Doctor and 1983-Brig, but the girls don't know that yet.)

The burned guy says his name is Mawdryn; the Art Deco spaceship is his, the seven other guys in suspended animation are his buddies, and they'd really really like the Doctor's eight remaining regenerations so they can put an end to their tortured lives. The Doctor refuses; the undead guys guilt-trip him, then end up triggering some time fluctuation contamination on Tegan and Nyssa, which they swear they'll knock off as soon as the Doctor gives them his lives.

The Doctor struggles to control the time fluctuations, as it washes back and forth over his companions and regresses Nyssa and Tegan to child-Nyssa and child-Tegan. Even though they are, basically, the cutest things ever (certainly the most adorable companions until wee Amelia), the Doctor prepares to sacrifice himself to save them... but the colossal energy that was to come from the Doctor's eight deaths comes instead from 1977-Brig and 1983-Brig meeting up at last and shorting out the time differential. 1983-Brig remembers just what caused his nervous breakdown. They drop the Brigs off in their respective times, and the Doctor continues on — with Turlough added to the crew, over Nyssa and Tegan's weary looks.

This story threw a colossal spanner into the works of dating the UNIT stories, since during the 1970s it had been strongly implied that the stories from "The Invasion" to "The Web of Fear" had been set a few years into the future compared to their broadcast dates (most explicitly, "Pyramids of Mars" in 1975 saw Sarah-Jane Smith state that her home time is 1980). This would finally get cleared up in 2013, when it was revealed that UNIT has various dating protocols. The sad thing is, this was totally unnecessary — the serial was to feature the return of Ian Chesterton, but when William Russell proved unavailable they first changed to Harry Sullivan (Ian Marter was also busy) then finally Nicholas Courtney as the Brigadier. Though it was suggested that the script change its scripted dates from 1977 and 1983 to 1983 and 1989 to avoid continuity errors, producer John Nathan-Turner refused, simply because he thought it'd be cool to set the earlier part of the story in the Queen's silver jubilee year.