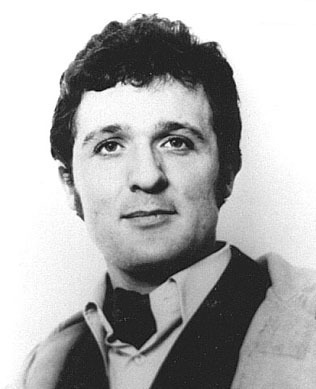 Ian Marter (28 October 1944 - 28 October 1986) was an English actor and writer. He is best known for playing the role of companion Harry Sullivan on Doctor Who from 1974-75, alongside Tom Baker's Fourth Doctor and Elisabeth Sladen as Sarah-Jane Smith.
Advertisement:

Marter's character was conceived as a young man of action to handle physical sequences, to fulfil the role than William Russell as Ian Chesterton and Peter Purves as Steven Taylor had played during the First Doctor's era. This was because the outgoing production team of Barry Letts and Terrance Dicks were originally planning to cast an older actor in the mould of William Hartnell as the Fourth Doctor, who would not have been able to handle such sequences. When they changed tack and instead cast the 40-year old Tom Baker as the Fourth Doctor, who was capable of performing action sequences himself, the role of Harry became into more of a Butt-Monkey.

New producer Philip Hinchcliffe felt that Harry was rendundant, since he was not needed as the sole man of action as originally envisaged, and therefore ordered him to be written out after one season. This was against the protestations of script editor Robert Holmes, who felt that Marter as Harry had a good dynamic with Baker as the Doctor and Sladen as Sarah-Jane. Today, fandom largely agrees with Holmes' assessment and holds Marter's performance in high regard.

After leaving Doctor Who, Marter moved into writing while also continuting with his acting career. Notably, he continued his association with Doctor Who by writing the Target Novelisations for nine televised serials, two of which he had appeared in as Harry Sullivan. He also wrote an original novel entitled Harry Sullivan's War, featuring his character as an MI5 operative.

During his period on Who, Marter had also collaborated with Baker on a speculative script for a Doctor Who feature film, titled Doctor Who Meets Scratchman, which would have pitted the Doctor, Sarah and Harry against a villain called "Harry Scratch", who was heavily implied to be Satan himself and who they hoped would be played by Vincent Price. Many years later, it would be adapted as the novel Scratchman, written by Baker in collaboration with the frequent Who spin-off writer James Goss.

Sadly, Ian Marter died of a heart attack on his 42nd birthday, caused by complications from diabetes. His untimely death meant that he was never able to write his planned sequel to Harry Sullivan's War, and was one of the few companion actors from the classic series who never had the opportunity to reprise his role in audio form for Big Finish Doctor Who.