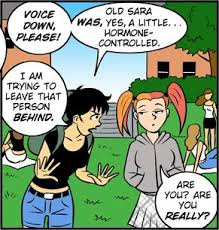 is a Spin-Off of Penny and Aggie, written by T Campbell and with art by Jason Waltrip. The focus of the comic is on alternative sexualities, the title being an acronym used by some in Real Life for "Queer/Questioning, Undecided, Intersex, Lesbian, Transgender, Bisexual, Asexual, Gay."

The comic follows Sara Kim (née Velte) and Lisa Winklemeyer, two Penny and Aggie characters who have just started college, and are roommates, at the fictional University of

Millard Fillmore, loosely based on the real-life College of William and Mary in Williamsburg, Virginia.

The comic was cancelled in October of 2012 due to Campbell being overall unsatisfied with the project and its direction. The archives remain online.