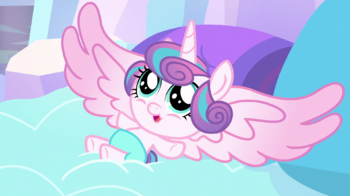 The cutest little harbinger of doom you'll ever see.
"Being a father is amazing! And wonderful! And amazing! And confusing! And amazing! But surprising too, you know? I mean, not that you'd know. You wouldn't know, I know... You know?"
—Shining Armor
Written by: Josh Haber
Advertisement:

Starlight Glimmer is anticipating her first friendship lesson with Twilight Sparkle, since Twilight has taken her on as her pupil and even given her a room in the castle. Meanwhile, the Mane Six await the arrival of news from the Crystal Empire: a formal invitation to visit because the royal foal is due any day. They are to take part in the Crystalling, a ceremony for newborns in the Empire that empowers the Crystal Heart and strengthens the shield protecting the Empire from the Frozen North's harsh climate. When the invitation arrives, Twilight decide to take advantage of the journey and reunite Starlight with her estranged friend, Sunburst, who now lives in the Empire. Starlight tries to hide her reluctance, but she isn't eager to meet Sunburst again since he's surely become a great wizard by now, and she's still ashamed of her past.

When the Mane Six, Starlight and Spike arrive, they find an exhausted Shining Armor waiting for them. He takes the Mane Six to the palace while Starlight goes with Spike to find Sunburst. Reluctantly, Starlight prepares to face her old friend, but Sunburst seems embarrassed by any talk about his new life as a "great wizard" — and Starlight is in no hurry to bring up her own past. Their conversation devolves into hesitant small talk, each of them afraid to reveal too much, while Spike goes over Twilight's "lesson plan" to see if anything in it can ease the awkwardness.

Inside the castle, Twilight and her friends finally meet the new baby, only to discover something very unexpected: the new princess is an alicorn! Not even Celestia and Luna have seen this before, and the baby's magic is wildly out of control. Cadance announces to the assembled public that the ceremony will be a bit delayed, while the Mane Six agree to help a very stressed Shining Armor finish the last chores. Pinkie and Twilight watch the new baby, dealing with her chaotic magic as best as they can.

Just as it looks like things are finally ready, a sudden tantrum from the infant princess causes a magical shockwave which strikes the Crystal Heart, disintegrating it into fragments. Everypony reacts in horror and shock, and the shield around the Empire drops quickly, letting the icy wind and snow of the frozen North into the Empire...

Continued in "The Crystalling – Part 2".