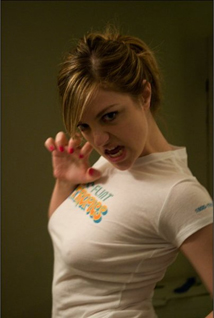 Comedienne born June 16, 1987 in New York City, New York, was the youngest female cast member on Saturday Night Live, and is the first SNL cast member who is the child of a former cast member (see Generation Xerox below). She also appeared in the movie No Strings Attached, and has lent her voice to the last couple of seasons of King of the Hill and Star vs. the Forces of Evil.
Advertisement: