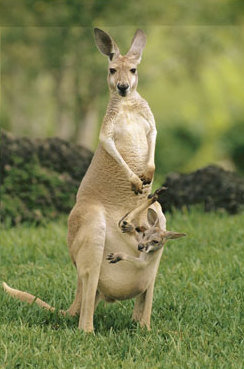 Why yes, this thing can and will kill you too.
Being an Australian, one reaction I often get from non-Australians is amazement that anyone can live in a country so full of deadly wildlife. But really, as long as you knock your shoes out every morning, and don't go poking in holes in the ground, and wear long pants with thick socks and heavy boots, and don't swim north of the Tropic of Capricorn in the wet season, and don't swim at all in the Northern Territory, and keep a forked stick handy, and an antivenine kit, and stay within a 10 minute helicopter flight of a hospital, you're perfectly safe. Most of the time.
— David Morgan-Mar, Irregular Webcomic! [1]

Australia has, without a doubt, some of the strangest animals around. We have poisonous toads that didn't do the job, there are the famous cute species like kangaroos, koalas, and wombats, a host of not-so-cute and incredibly deadly creatures, and some of the world's only egg-laying mammals, who are quite cute themselves at a safe distance. Aren't we lucky?

Of course, living in Australia doesn't automatically mean you'll die just by stepping in 100 yards of Oceania. It's just as relatively safe as any other modern country, with slightly more caution about where you put your hands and feet. Also on the bright side, the area between and around Sydney and Melbourne has fewer instances of the super deadly wildlife (for example, no box jellyfish, crocodiles, dingos or taipans, but it still has sharks, spiders, other venomous snakes, jellyfish with painful stings, a species of blue-ringed octopus, and, of course, rabbits). Besides, to actually stand a chance of death by Australian wildlife, one has to either completely ignore safety instructions and first aid (you will be given first aid, for example, if you get a box jellyfish/stonefish/blue ringed octopus sting at a patrolled beach or one within easy reach of ambulances), enter undisturbed bushland inadequately prepared (though there's plenty of it, "undisturbed bushland" does not include the cities, tourist areas, beaches and farmland), deliberately provoke and/or corner the animals (the adage "don't bother them and they won't bother you" comes to mind), or any mix of the three.

Interesting note: perhaps due to the beauty and strangeness of native Australian wildlife and plants, Australia has a very large population of environmental activists — the sane and pragmatic kind, not the PETA kind (mostly). The late Steve Irwin and his family are prominent environmentalists who use their shows and zoo to promote the protection of wildlife the world over. note ...Until he was stabbed to death by the very wildlife he was trying to save (to be fair, it was accidental: he startled a stingray, resulting in a very unlucky one-shot to the chest), the footage of which emerged onto the internet despite his wife thinking she destroyed the footage. But his death created an immense surge of pro-environmental activity that continues to this day.

See also: Yowies and Bunyips and Drop Bears, Oh My.

Marsupials
Birds
Reptiles
Amphibians
Insects, Arachnids and related
Fish and other aquatic creatures
Pests/noxious weeds/feral animals/target practice
Note that all the pests, etc. listed below are imported species. The Australian ecosystem is as unique for species which are not present as it is for those that are. Australian species have proved unable to cope with many imported species which can out-breed or out-eat them. Australia is also free of many wildlife diseases that are common in other parts of the world. It is for this reason the Australian Government takes quarantine and biosecurity very seriously. note Up to and including threatening to execute a certain well known actor's dogs.
Plants
And now, a song