Film / A Princess For Christmas 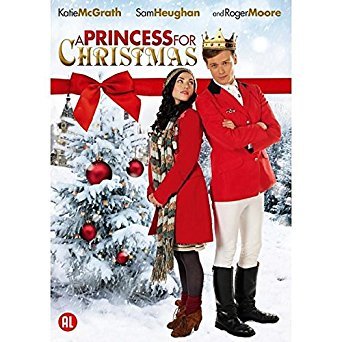 A Princess For Christmas is a Made-for-TV Movie that premiered on Hallmark channel in 2011. While a modernized version of Cinderella, it also explore the thematic of mourning and inter-class romance, - and is set during Christmas holidays.

Jules Daly (Katie McGrath) has raised her nephew and niece Milo and Maddie by herself since their parents died the year before. A few days before Christmas, they are invited to go to the Castelbury palace by the kids' grandfather, Duke Edward Huntington (Roger Moore).

The latter disowned Charles, his eldest son, after he married Jules's sister, who was of an inferior social rank. Still, he now wishes to meet his grand kids. Jules, as a Christmas enthusiast, tries to cheer up everyone, while romance blossoms between her and Ashton (Sam Heughan), Edward's youngest son. Who's a prince, by the way.

A few years before Netflix's movies A Christmas Prince and The Princess Switch, the movie explored the thematic of a middle class-character falling for European nobility, Promotion to Parent, and Heartwarming Orphan, all wrapped up in the Christmas atmosphere. Still, the mourning characters make it a bit Darker and Edgier than its Spiritual Successor.