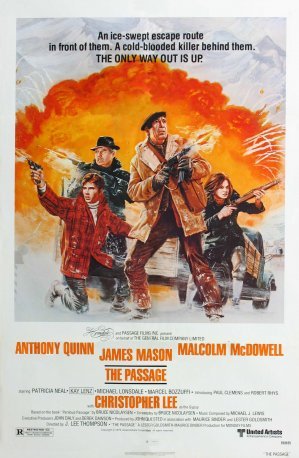 Professor John Bergson (Mason) is a scientist who is wanted by the Nazis. Perea of the French resistance entrusts him and his family to the care of an elderly Basque shepherd (Quinn) who will show them through a passage in the Pyrenees Mountains so they can reach neutral Spain. In the meantime, they're pursued by sadistic SS officer Captain von Berkow (a scenery-eating Malcolm McDowell), who is determined to capture them.

It is based on the Bruce Nicolaysen novel Perilous Passage. Nicolaysen also wrote the script, and it is to date his sole screenwriting credit. The film is known to have bombed spectacularly for a variety of reasons including rather shoddy production values despite its budget and star-studded cast, and its rather unusual, meandering editing style. Critics of the time also latched onto a scene involving von Berkow wearing a Nazi jockstrap as the most visible example of the overly-indulgent film's refusal to even take itself seriously. Nevertheless it remains something of a cult film.

Not to be confused with the 2010 novel by Justin Cronin. Or with the 2002 Connie Willis novel Passage.