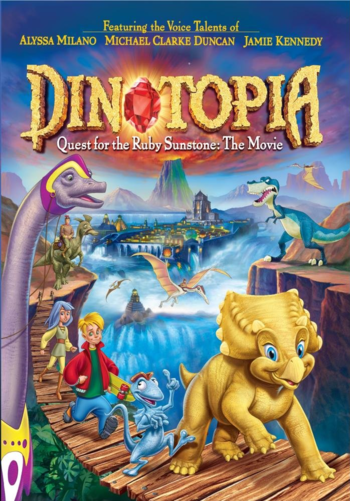 Dinotopia: Quest for the Ruby Sunstone is a 2005 Direct to Video animated film, loosely based on the Dinotopia book series. Produced by Hallmark Entertainment, it also takes some things from their previous Dinotopia miniseries, most notably the character of 26, the Chasmosaurus.

A 12-year-old orphan, Kex Bradley, escapes from an orphanage, hoping to see the world. He stows away on a lifeboat, but is later pushed overboard during a storm out at sea and later finds himself on an island called Dinotopia. Here, he befriends the beloved young dinosaur 26 and a 12-year-old girl named Mara. They get in trouble fast as the evil Ogthar is released from his stone prison and recovers the Ruby Sunstone, whose dark power can endanger all of Dinotopia. They soon have to stop Ogthar in time to save Dinotopia.