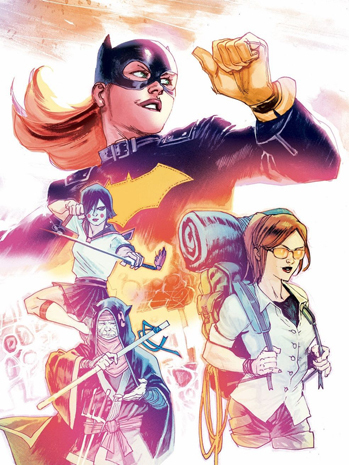 Batgirl (also unofficially known as Batgirl Rebirth) is a 2016 monthly comic book published by DC Comics as a part of their DC Rebirth rebranding initiative, written by Hope Larson with art by Rafael Albuquerque.

The series is a direct sequel to Batgirl (2011), which ended with Barbara Gordon (the original Batgirl) heading off to Japan to undergo more combat training, as her skills and motivation had begun to wane during the last few issues of that title.

The first arc follows Babs on this journey of self-improvement as she hops around Asia, facing various talented fighters in pursuit of the mysterious Teacher. She is joined on her travels by an old friend she happens to meet in Japan, who may not be what he seems. This first arc takes place prior to the beginning of Batgirl & the Birds of Prey, another Rebirth title.

Barbara returns to Burnside after her trip to find new tech startup companies springing up everywhere, leaving the neighborhood even trendier than before. As Barbara readjusts to life back home, she meets a new potential love interest: a smart, handsome tech wizard named Ethan... Ethan Cobblepot.