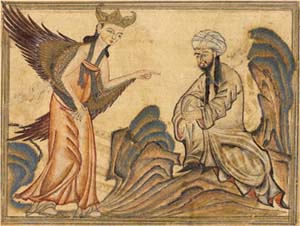 Muhammad receiving his first revelation from the angel Gabriel. Painting in Jami' al-Tawarikh, 1300 C.E.
(Peace Be Upon Him.)
Advertisement:

Muhammad ibn Abdullah. The final Prophet of Islam, as appearing or referenced in literature or the arts.

The main sources on the life of Muhammad are the sira (prophetic biographies) and the hadith (sayings of Muhammad). The Qur'an, in contrast, contains little information on Muhammad and his life.

According to his biographies, Muhammad was the only child of Abdullah ibn Abd al-Muttalib and Aminah bint Wahb, the former of whom died before he was born. As per Arab custom at the time, he lived with a wet nurse for two years, during which the first proof of his prophethood manifested. Muhammad lost his mother at six years old and grandfather Abd al-Muttalib ibn Hashim, who took him in after Aminah's death, at eight years old. His subsequent years growing up were spent with his paternal uncle, Abu Talib ibn Abd al-Muttalib.

Abu Talib was chief of Banu Hashim, one of the many clans that formed the Quraysh tribe of Mecca, and conducted frequent trips abroad. One day, when he brought Muhammad to one of these trips, the two met a Christian priest, who prophesied about Muhammad's prophethood. As he grew older, Muhammad worked as a trader on behalf of merchants and became well-known for his honesty. One of the merchants employing him was a successful businesswoman named Khadijah bint Khuwaylid. Impressed by his conduct, Khadijah proposed to Muhammad and was accepted. Muhammad was monogamously married to Khadijah until her death, and she gave birth to the prophet's only child to produce a lineage that survives to this day, Fatimah.

Muhammad received the first confirmation of his prophethood, as well as the first message from God, at the age of 40. While he was spending a night at Jabal al-Nour, a hill outside Mecca, the angel Gabriel descended to him and delivered the first five verses of the Qur'an. Khadijah was the first person to believe his words, followed by Ali ibn Abu Talib, his cousin. Gabriel would continue to deliver other verses of the Qur'an until Muhammad's death 23 years later, in time to serve the needs of the people, places, and times.

With the words of God at hand, Muhammad began preaching to the people of Mecca, confirming his status as the last of the prophets, decrying their corruption and idolatry, and stressed that only belief in God and doing good deeds in His name would give them peace in life and death. A few believed his words, but most were either ambivalent or hostile, regarding them as affront to their pagan faith. Politically, Muhammad was protected by Abu Talib (though he would remain pagan until his death), while Khadijah provided his finances. As a result, when the two died within the same year, opposition to the prophet became more and more pronounced. He and his followers had previously emigrated in search of safety to Abyssinia, but returned to Mecca a few years afterward. When the threat of Muhammad's life was at stake, he and his followers emigrated again, this time to Yathrib, a city several hundred of kilometers north of Mecca.

Yathrib was a mixed pagan Arab-Jewish city, and there was some opposition regarding Muhammad settling there. However, the environment was nowhere as hostile as in Mecca, so Muhammad and his followers established the first organized Muslim community there, giving Yathrib its current name, the City of Light (al-Madinah al-Munawwarah, or Medina for short). The community grew stronger throughout the years and turned into a military and political force to be reckoned with. With this force, the Muslims gradually conquered Arabia and eventually succeeded in taking Mecca. The conquest was done by persuasion, treaties, and warfare as a last resort when the treaty was violated. Ten years after the migration to Medina, the Seal of the Prophets preached his last sermon atop Mount Arafat before dying several months later. By his death, the Muslims had conquered all of Arabia.

Having had a huge impact on the history and cultural development of the world, Muhammad is one of the most interesting Historical Domain Characters to use in works. However, portraying Muhammad is often considered controversial, and thus portrayals of him tend to be about these controversies rather than about Muhammad himself. There are four such portrayal problems:

For more on these four issues, see the analysis tab.

See also Useful Notes on Islam and The Qur'an.

Tropes found in works that deal with the Prophet Muhammad:

Works that feature the Prophet Muhammad: