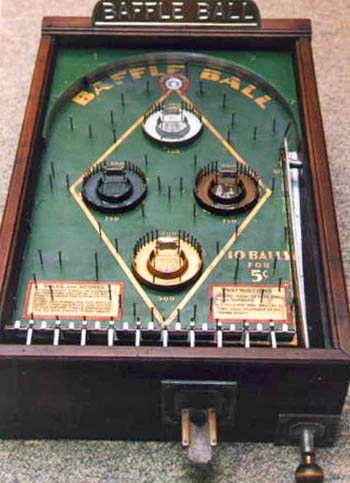 No discussion of pinball history would be complete without mentioning Baffle Ball. Invented by David Gottlieb in 1931, this is the first commercially successful "pin game". It is rightly credited with jumpstarting the entire pinball industry, to the point of often being misidentified as the first pinball game ever.

As with other such games of the time, Baffle Ball required players to shoot ten colored metal balls into a series of scoring pockets or slots. Shooting a ball into a hole of the same color doubled the score, and shooting a ball into the "Baffle Point" at the top of the field doubled the score for the entire game. The success of Baffle Ball came from a combination of challenge and affordability during The Great Depression; a Baffle Ball machine cost $17.50 to buy, and games cost only a penny to play. In contrast, competitors like Whiffle cost over $100 for a machine and required a nickel to play.

While Baffle Ball did not cause a nationwide shortage in pennies, it did become an instant sensation, and Gottlieb boasted that many locations made back the cost of the machine after a single day. Some unscrupulous operators would offer cash rewards for high scores, further enticing players to feed in their pennies. With the factory running 24 hours a day, Gottlieb could produce 400 games a day... but they had 75,000 orders to fill. Baffle Ball's success prompted similar machines from Gottlieb's competitors, including Bally, Rock-Ola, and Williams Electronics.

In the end, 50,000 Baffle Ball machines were made with different prices and balls per game. By the time the line stopped, it had spawned a new industry, started a new company, and secured a place in gaming history.

A digital version is available on Microsoft Pinball Arcade.