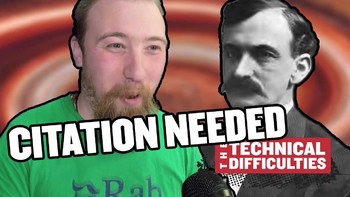 Mystery Biscuits!
This is The Technical Difficulties, we're playing Citation Needed...in front of me I've got an article from Wikipedia and these folks can't see it, every fact they get right is a point and a ding and there's a special prize for particularly good answers which is...MYSTERY BISCUITS!* Oh yeah!
Advertisement:

Citation Needed is a Web Video Series produced by The Technical Difficulties, with Tom Scott acting as the host and moderator while the other members — Chris Joel, Matt Gray, and Gary Brannan — act as contestants. It is an episodic Panel Game along the lines of QI, where Tom "almost-randomly" selects an article from That Other Wiki (keeping the article hidden from the others) and asks questions related to it while the other three try to answer them. Correct answers earn points and a ding, while particularly good answers are awarded MYSTERY BISCUITS!* Oh yeah!.

Jokes, puns, and divergences abound as Tom tries to get through the article in some semblance of time while awarding points and MYSTERY BISCUITS!* Oh yeah! to the panelists.

The final episode, The Sweater Curse and Clothing Controversies, was uploaded on November 29, 2018.

Not to be confused with the the blog of the same name, and definitely not the much more serious "Citations Needed

So, with that, we say thank you to Chris Joel, to Gary Brannan, to Matt Gray, I've been Tom Scott and we'll see you next time!

Example of:
Speak in Unison