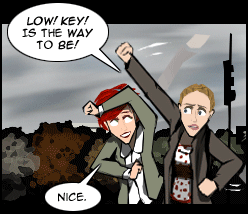 You said it, Julie!

Kate: Hey, this says you need a sign. I can do that!

Milton: Aw, you don't have to, Kate. It's a plain old boring sign. I can handle that.
Kate: Milton, what's my most favorite thing in the world?
Milton: "Bringing a sense of joy and wonder to the otherwise dull and mundane."
Kate: I was going to say, "the smell of marker fumes." But, uh, that joy and wonder thing is right up there.
Advertisement:

Tweep is the story of a group of friends and their acquaintances, living their lives with only the briefest forays into the realms of hipster kings and the like.