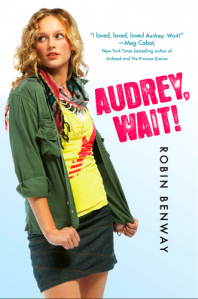 Audrey, Wait! is a charming Coming-of-Age Story by Robin Benway

about a girl in California who breaks up with her musician boyfriend... causing him to write a hit single about their break up that sweeps the globe. Suddenly her ex-boyfriend is famous, and she's reluctantly pulled along in the wake of his success. Her best friend Victoria (and her boyfriend, Jonah) help her through the initial shock of fame, through thick and thin as the paparazzi and frenzied public complicate their lives.

It gets worse when Audrey gets a chance to go back stage at a concert with a favorite band of hers, where a short fling with a famous singer ends badly. Now the media is twisting the events to paint her as the next Britney Spears, and her phone/personal email flood with nasty accusations from the general public. Things continue to snowball from there as Audrey grapples to hold on to her friends and finally get the tabloid writers away from her and her family.

The novel is written as though it were her factual recount of the events that led to her fame. The narration is laid back, easy going, generally quite humorous, and littered with all sorts of pop culture and new media references.