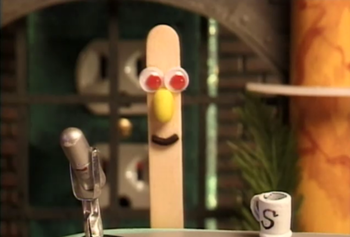 Stick Stickly was a Nickelodeon host from 1994 to 1998. Stick, as his name implies, is a living popsicle stick who lives in Stickopolis, located next door to Nickelodeon Studios. In-between regular programming, his own miniature segments aired, such as "Dip Stick," where he'd be dipped in something at viewers' suggestions and try to guess what it is, "Stump Stick," where viewers would try to stump him with riddles, or "U-Pick," where he'd "live" host an upcoming show. Stick also told fortunes and hosted a news show alongside his assistant and crush, Holly B. Wood, had a superhero identity as SuperStick, an arch-nemesis in Evil Stick, and various other segments. Stick was also the host of a Nickelodeon-themed version of 3D Movie Maker.

Nickelodeon retired the character after 1998, though not before he got two made-for-TV specials. The first, Oh, Brother, revolves around Stick discovering he has a long-lost twin brother, Woodknot, and searching for him all around New York City. The second, Stuck, is a winter special where Stick becomes a legendary ice skater by accident, but needs a skate to participate. Meanwhile, Stick's mother and his friend, Twiggy, get snowed in, but when Stick finally gets his skate he discovers it's stuck on his foot and won't come off.