Recap / Asterix and the Banquet 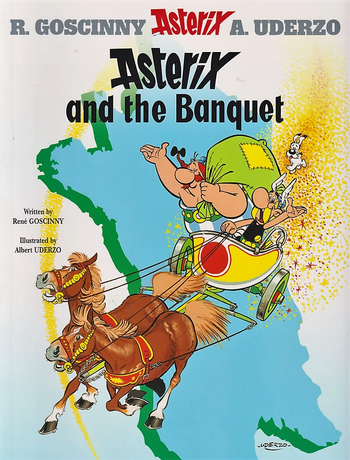 After two journeys abroad, the fifth Asterix book has our heroes go on a grand tour of their homeland.

Inspector General Overanxius visits the Roman camp of Compendium on Caesar's behalf, determined to subdue the Gauls of Asterix's village. One resounding defeat on the battlefield later, he decides that since they can't be subdued, they should be isolated from the world, and has a giant wall built around the village. Asterix declares that not only will he escape, but also make a tour through all of Gaul, collecting special foods from different spots as evidence; if he succeeds, Overanxius will take down the wall. Accompanied by Obelix, who carries a large yellow shopping bag for the food, and with the rest of the village attacking the wall south of the village as a diversion, Asterix makes his break through the wall north of the village. He and Obelix think little of the Roman soldier on horseback they see riding in the distance as they make their way to Rotomagus (Rouen today).

However, the Roman soldier was a messenger, and the Roman garrison at Rotomagus is expecting the two villagers, who hide in the river and commandeer a pleasure boat being used by a Roman couple to the first stop on their shopping trip, Lutetia, where they buy a hamnote  Jambon de Paris, more precisely. from a pork butcher (and are promptly followed by a small black and white dog). The appearance of a Roman patrol forces them to flee and buy a used chariot from an ancient version of Honest John's Dealership; when it inevitably breaks down, they knock out the Roman driver of a breakdown chariot before he can turn them over to the authorities, and make their way to Camaracum (now called Cambrai) to buy a bag of humbugs.note  That is, Bêtises de Cambrai.

With help from the shopkeeper, they bash in the Roman patrol waiting for them and go back on the road in the stolen breakdown chariot, where legionary Spongefingus, whose chariot has broken down, mistakes them for the genuine article and unwittingly helps them get past a roadblock. Once he has outlived his usefulness, the Gauls literally cut him loose and head for Durocortorum (known as Rheims today) to buy amphoras of the local wine.note  Champagne,

naturally. Spongefingus catches up with them, but Asterix pops the cork on one of the amphoras of wine straight into the legionary's jaw, and they are on their way again.

Cutting through the forest, the duo smell roast boar, and come to the house of Unpatriotix, a treacherous Gaul who invites them in, feeds them, and then sneaks off to sell them out to the Romans while they nap. However, Obelix goes out in search of more boars, so that only Asterix is there when the Romans arrive; a panicked Unpatriotix is unable to pack and escape before Obelix returns and shakes Asterix' whereabouts out of him: the nearby town of Divodorum (Metz today). Obelix gets himself arrested by knocking out a legionary and bringing his unconscious body to the jail, and soon, he and a magic potion-strengthened Asterix have broken out and hijacked a Roman postal service cart (sporting the then-modern logo of La Poste, France's postal service) to Lugdunum (today known as Lyon).

Prefect Poisonus Fungus orders his men to stop the two Armoricans when they arrive at Lugdunum, but one of his slaves is a member of the local resistance, and the leader, Jellibabix, ushers Asterix and Obelix down a side road when they find themselves seemingly surrounded by Roman patrols. He leaves them with friends and heads to the prefect's palace, ostensibly to lead him to the two outlaws. However, Lugdunum's streets are a giant maze that only locals can navigate without getting utterly lost, and one quick sprint later, Jellibabix has left the Roman patrol following him unable to find each other or their way out; even the prefect gets lost when a well-meaning legionary picks up the stones he tried to use to mark his route. Jellibabix gives Asterix and Obelix a gift of sausages and meatballsnote  More precisely, saucisson de Lyon

. and a chariot, and they move on.

Their next stop is Nicae (Nice as it is now known), where, after dealing with uncommonly long traffic jams as seemingly the entire population of northern Gaul descends on the Gaulish Riviera for the beginning of the summer holidays, they buy an amphora of saladnote  Salade niçoise,

to be exact. and begin heading toward their next destination when a Roman patrol spots them. They commandeer the boat of a holidaymaker and row up the coast to Massilia (today called Marseilles), leaving the unfortunate holidaymaker to carry his boat back to Nicae on foot. They stop at an inn to buy fish stew;note  Specifically, Bouillabaisse.

the innkeeper, Drinklikafix, is delighted to meet them and he and his regular patrons offer to help them by holding up the Roman patrol hot on their tail with a game of boules.

As Asterix and Obelix head for Tolosa (today called Toulouse), darkness falls, and they rest for the night... only to discover, when dawn breaks, that they have spent the night in the middle of a Roman camp! Deciding that "hitching" a lift with the Romans to Tolosa will speed things up a bit, they turn themselves over to the camp centurion, who, after several failed attempts to put them in chains, takes them to see Prefect Adipus in a cart. When he returns with the prefect, the Armoricans have bashed in his legionaries and left with the cart and some local sausage.note  Namely, Saucisse de Toulouse.

The enraged Romans put a 50,000 sestertii price on Asterix and Obelix' heads, attracting the attention of collaborator Uptotrix in Aginum (today called Agen); he promises the local Roman commander that he will give the two outlaws drugged food and deliver them into the commander's hands. When our heroes arrive, Uptotrix meets them and takes them to his inn, where he first gives them a bag of local prunesnote  Pruneaux d'Agen, as they are now known. and then starts serving roast boars to each of them; Obelix begins eating immediately, but a suspicious Asterix forces Uptotrix to eat some of the other boar, and he drops to the floor, fast asleep (Obelix is unaffected; on the contrary, he describes the boar as "a real eye-opener"!).

Leaving the cart behind and continuing on the horses, Asterix and Obelix are forced to stop for the night when Obelix' horse collapses under the weight of his rider and the shopping bag; while they sleep, two bandits steal the shopping bag... and, as they are of similar build to Asterix and Obelix, they are arrested by the first Roman patrol they encounter. They are put on display in the main square in Burdigala (called Bordeaux today) as an example to the locals... only for the real Asterix and Obelix to arrive, reclaim their shopping bag, and bash in the Romans (with help from the locals) before heading on their way with some white wine and oysters.note  Bordeaux wine

and oysters being a delicacy even then.

They find a ship in the harbour, captained by Seniorservix of Gesocribatum (now called Le Conquet), unloading a cargo of menhirs; Obelix helps them unload in exchange for passage for the two Armoricans back to Gesocribatum (a journey that includes an encounter with Redbeard and his band of pirates, who, in this volume only, include Redbeard's son Erix), where they are smuggled ashore in bags. However, a miscommunication causes them to exit the bags right in front of a Roman patrol, and they are forced to thump their way out of the city and back to their village.

Overanxius is summoned to the village to see the food Asterix and Obelix have brought back with them, but there is one specialty missing: the village's own specialty, which Asterix happily serves to Overanxius... the uppercut. (Obelix, meanwhile, finally notices the small black and white dog that has been following them since they left Lutetia, and takes an immediate liking to him.) The book ends with the usual celebratory feast, which here includes delicacies from all over Gaul in addition to roast boar.