Web Video / The Legend of Neil 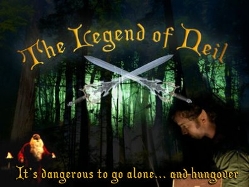 "The last thing that Neil remembers, he was drunk, playing a game of Zelda..."

The Legend of Neil is an Affectionate Parody of the original 8-bit The Legend of Zelda game for the NES, taking the "sucked into a video game" concept of quite a few kids TV shows and turning it on its head by introducing a grown man (in this case also a loser), and throwing him into the often nonsensical world of Hyrule. Hilarity Ensues, of course. Written by Sandeep Parikh and Tony Janning, it stars the latter as Neil, while the former sings the theme song accompanied by a mandolin. An ensemble cast (including Felicia Day, of Dr. Horrible's Sing-Along Blog and The Guild fame) and a variety of special effects ranging from So Bad, It's Good to surprisingly not bad add to not only a pretty funny show, but a great deconstruction of Zelda and the action-adventure video game genre as a whole.

Each episode is around seven or eight minutes long and begins with a cold opening, followed by the theme song, followed in turn by a sung description of what happened previously on the show, which grows longer and longer as each season progresses. The first season serves mainly to set up the plot and deals with Neil's efforts to beat Level 1, while the second season opens with a flashback of Neil's life before getting sucked into the game, and his continuing impatience and reluctance with his quest; the third and final season shows Neil accepting his role as Link, the hero of Hyrule, and overcoming various trials to finally defeat Ganon.