Literature / Legion of Nothing 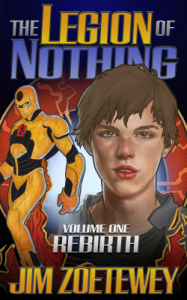 The cover of "The Legion of Nothing: Rebirth"
The Legion Of Nothing

is a Web Serial Novel (and also a book) about the Grand Lake Heroes League of Grand Lake, Michigan, a team of teenagers with superpowers. It is written by author Jim Zoetewey.
Advertisement:

They are the children and grandchildren of the members of the original Grand Lake Heroes League, a group of former World War II soldiers who were part of an elite unit of superpowered soldiers. They came home after the war and continued to use their powers to combat organized crime and other villains, powered and otherwise in the 1950's.

The lead character, and the one through whom the story is told is Nick Klein. His grandfather was the Gadgeteer Genius known as The Rocket. Among his inventions, a suit of Powered Armor equipped with numerous weapons and a rocket pack (not unlike Iron Man). Nick isn't really sure he wants to take up the superhero mantle, but a group of his friends decide to revive the League, and Nick in turn dons his grandfather's armor.

Both parts a Super Hero and Coming of Age story, Fans of the series have noticed its sense of humor and use of pacing. Cliffhanger endings are common due its serial nature.