Web Animation / The Legend of Korah 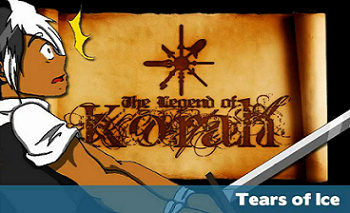 The Legend of Korah is a Flash animation series created by the author known as Xela/NFnote The former is an anagram for Alex, the later is initials for "Nintendo Flash" and the same internet community behind Eutopia, the Worlds.

The setting is a High Fantasy medieval world combined with some battle shonen, making quite a mix of Swords-beating-everything, glowy energy beams and "I was testing you by using my left hand" speeches.

Korah, a 15-year-old swordsman decides to take revenge and stop the evil emperor Nergal from taking over the world. To do so, he must find and recruit the seven other swordsmen, who wield the legendary weapons needed to defeat him.

It can be seen on Newgrounds here

Considering that it's a team based project, anyone can join in here

Not to be confused with The Legend of Korra.