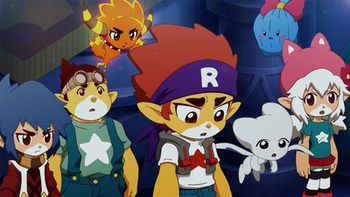 Long Xing (center) and friends from the movies.
Advertisement:

The game takes place in the eponymous Roco Kingdom, where the Roco people live and work together with their pets. Many ancient legends can be found in this kingdom, along with all kinds of ancient magic. Players can battle each other's pets, and the pets have one or two of several element-based powers associated with them and can use attacks involving those elements - much like Pokémon.

The game has been updated regularly since its initial release and has achieved enough popularity in its native country to spawn a heap of merchandise and several Derivative Works, including: