Film / The Secret of the Magic Gourd 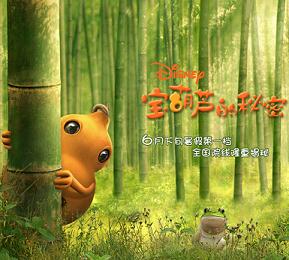 A live-action Disney film that incorporates CG characters. It was co-produced with a Chinese movie company in 2007 and was released widely in China. It was released as a made-for-television movie in Disney Channel in the United States and Southeast Asia in early 2009.

The Secret Of The Magic Gourd is about a boy named Wang Bao who usually has his head off in the clouds. He's a bit of a slacker and although he has high expectations, generally doesn't want to put in the effort to work towards them.

One day while fishing at a lake, he catches the Magic Gourd, who calls himself Bao Hulu. Bao Hulu has the power to make any wishes come true, and unlike a genie, is not limited to just 3. The Magic Gourd makes himself Wang Bao's constant servant, using his magic to fulfill all of Wang Bao's needs and wants (and even anticipate what he believes to be some of them). This generally has disastrous results, but it teaches Wang Bao the value of honesty and hard work.

''The Secret of the Magic Gourd" provides examples of the following tropes: