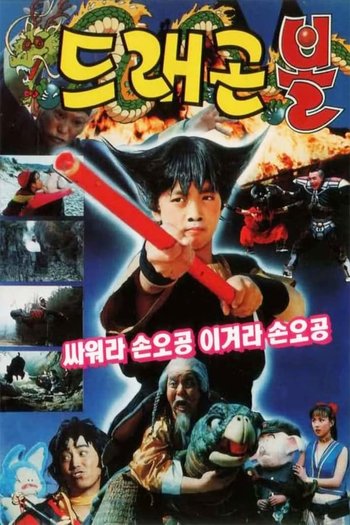 Goku is a kid, Master Roshi has a turtle and Yamcha has Puar... now this one really LOOKS like Dragon Ball!
Advertisement:

Dragon Ball: Fight For Victory, Son Goku! (Deuraegonbol: Ssawora Son Ogong, Igyeora Son Ogong note it literally means "Fight Son Goku, Win Son Goku", which is a cheer, so we used a more localized title; for anyone asking about "Ogong," that's the name used for Goku in Korean localizations of the series, stemming from "Son Ogong" being the Korean name for Sun Wukong, named "Son Goku" in Japanese and being the namesake of Dragon Ball's Son Goku) is a unofficial Korean Live Action movie strongly based on the Dragon Ball franchise.

It was released on 1990 by (normally) animation studio Dai Won; and for those who have seen it, it's full of Narm Charm and B-movies charm.

In comparison with the other two Dragon Ball films, the American Dragonball Evolution and Taiwanese Dragon Ball: The Magic Begins, this movie is by far the most faithful to Akira Toriyama's story, and the one that received the highest ratings in the Internet Movie Database (5.0, against 3.1 of DBE and 3.8 of DBTMB).