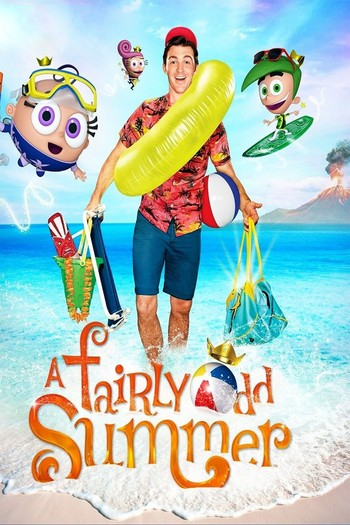 One more adventure with some fun in the sun.
Advertisement:

A Fairly Odd Summer is the third and final of the live action The Fairly OddParents movies released in 2014.

Timmy is now working in Fairy World as a disposal worker while Tootie works at a research center. She soon informs him that she's been given the job of going to Hawaii to deliver a cure for spotted whales. Coincidentally enough, Timmy's parents are heading there for a company luau with Timmy's Dad delivering a check and Jorgen later heads there as well for a body building contest, leaving Timmy in charge of the Abra-Cadabrium, the source of all magic in the universe.

It seems Timmy's been left out of the fun until he finds out Tootie and his dad accidentally left their respective objects at home, necessitating a trip to Hawaii to go deliver them to save their jobs. However at the same time Foop, who's been scolded by the Anti-Fairy Council for his constant failures, is sent to destroy the Abra-Cadabrium. Running into Mr. Crocker who is in Hawaii for a seminar and convincing him to team up. Add in that Vicky is likewise there on nanny duty and it looks like Timmy's impromptu vacation could be spoiled before it even begins.

A Fairly Odd Summer has the following tropes