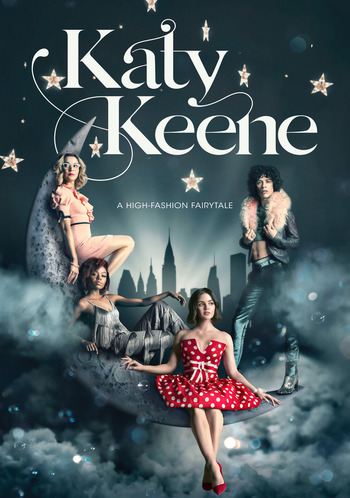 Katy Keene is an American Dramedy television series on The CW based on the comic book series of the same name. It’s the second spinoff of Riverdale following Chilling Adventures of Sabrina, the show is set in New York City a few years after the events in Riverdale. Lucy Hale stars as Katy, and Ashleigh Murray's Josie McCoy, introduced in Riverdale, is also a lead. Also appearing in the show are Jorge, Katy's friend who's a drag queen trying to make it on Broadway; Pepper Smith (pulled from Josie and the Pussycats) as an ultra-connected gossip columnist and The Cabot Twins, Alex and Alexandra (also pulled from Josie and The Pussycats) as ultra-rich media moguls.

in July 2020 that the show had been cancelled after one season due to modest ratings. An attempt to move it over to HBO Max failed, due to the soft ratings and COVID-19 pandemic upending film and television production. The show isn't completely forgotten about; Riverdale season five makes several references to the story and characters, with even a few guest spots as Riverdale did a Time Skip to Katy Keene's timeline.