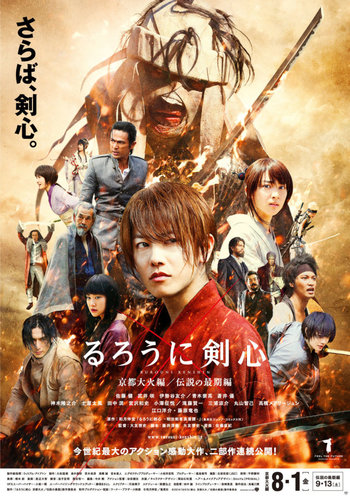 Feel the future.
"Japan is about to lose its way. Shishio will seize his chance. It's war. See you in Kyoto."
— Hajime Saito
Advertisement:

Himura Kenshin (Takeru Satoh) couldn't be any more happier. Not only has he continued to stay true to his pacifism, he has also found a new home with Kendo teacher, Kaoru Kamiya (Emi Takei). This peace is interrupted when the Japanese government arrives at his doorstep with an important mission: to eliminate former Ishin Shishi soldier, Makoto Shishio (Tatsuya Fujiwara). Having survived a fiery assassination attempt just minutes after the Battle of Toba-Fushimi, Shishio has planned for revenge by unleashing a reign of terror upon Kyoto itself. Thus, Kenshin must enlist old friends and new allies to take down Shishio's army and protect the city at all costs.

This film is followed by Rurouni Kenshin: The Legend Ends, which was released one month later.

♫ It seems like gravity keeps pulling us back down
Don't go! it's a mighty long fall
When you know time is up! ♫