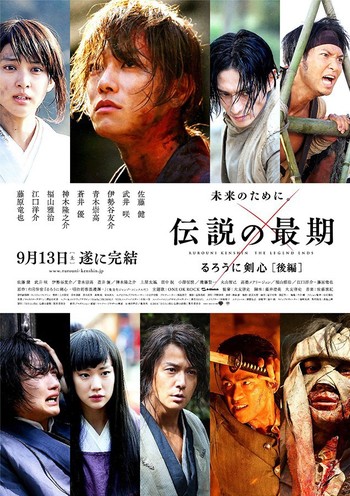 "Japan's future depends on your sword!"
"If you can't see what you lack, you can't win. If you win by luck, you won't defeat your Hitokiri self. It mustn't win. You'll always feel suffering and grief and you'll kill again."
— Hiko Seijuro XIII
Advertisement:

After seemingly losing Kaoru Kamiya (Emi Takei) and failing to prevent Makoto Shishio (Tatsuya Fujiwara) from setting sail to Tokyo, Himura Kenshin (Takeru Satoh) finds himself at his lowest point. Fortunately, there is a silver lining: the possibility of learning one last technique from his former master, Hiko Seijuro XIII (Masaharu Fukuyama). To master this move, Hiko orders Kenshin to seek out the one value he doesn't possess, a task that proves to be difficult. Meanwhile, Shishio sets out to control the Japanese government, demanding that they find and execute Kenshin, or risk having their cover-ups leaked to the public. Nonetheless, the fate of the entire country depends on Kenshin, who can finally prove himself as a hero who won't kill, if he defeats Shishio first.

This film is followed by Rurouni Kenshin: The Final.