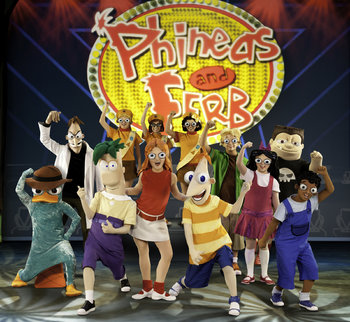 So your show (or Show Within a Show) is hugely popular among a wide audience. For example, Tropey the Wonder Dog. So what do you do next? Well, it's only natural that you produce Tropey The Wonder Dog Live! and tour it in major arenas! When your work gets turned into a live stage show featuring people in costumes, you've officially made it in showbiz.
Advertisement:

Live on Stage! are stage productions based on directly or indirectly on licensed properties. The differences between this and a Screen-to-Stage Adaptation is that this type of show:

If the show adapted is a cartoon, also expect it to:

And as with many Show-Within-A-Shows, a in-universe Live on Stage! show may be rife with Adaptation Decay and Stylistic Suck, as well as lots of Camp.

Sub-Trope of Recycled IN SPACE!. This trope's own Sub-Trope is On Ice.