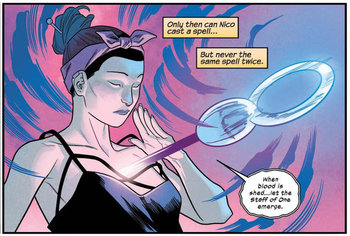 Goku: Hey, no fair! I can't pull swords out of my body.
Sansho: Stand still and you will!
— Dragon Ball Z Abridged, The Dead Zone
Advertisement:

This is pretty simple: weapons getting pulled out of people. In some settings, it's only one or two people who can do it; in others, it's just the way things are. In some cases, the weapon's appearance and type will be based on the personality of who it's coming out of.

Not to be confused with a character using a weapon they had been stabbed with. Related to Equippable Ally and Retractable Weapon.