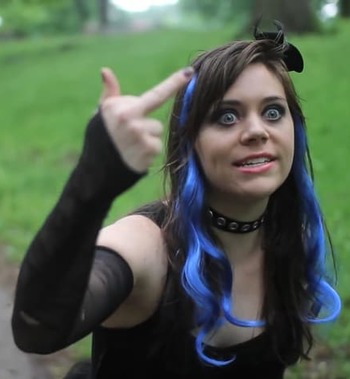 We managed to make a Cult Classic out of the most hated fanfic of all time, so SIT ON IT!
Draco: You're… Ebony, right?
Enoby: Yeah. Enoby Darkness Dementia Raven Way. I think it's Celtic.
Advertisement:

First came My Immortal, the infamous mother of all bad fanfictions, with its somehow popular usage of the Mary Sue, an Out of Character "goffik" cast, and senseless plot.

Then someone decided to (loosely) adapt it into a live action web series. It's called (My) Immortal: The Web Series, and it's Better Than It Sounds.

The plot centers about Enoby Darkness Dementia Raven Way, who's a new student at Hogwarts and is "so much of a Slytherin and so much of a Gryffindor that the Sorting Hat just put me in both". She's somehow friends with Harry Potter (whom she used to date, and she calls him Vampire), Ron Weasley and Hermione Granger, even though she's oblivious at best, and a terrible friend at worst, and also scores a date with Draco Malfoy. All is well… until a mysterious blonde girl appears at school.

The show debuted in 2013, and lasted for two seasons. It can be found on Youtube

(My) Immortal: The Web Series provides examples of: