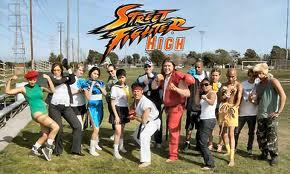 Before the fight in the ultimate world tournament, there was the fight...to fit in.

They would become the world's ultimate fighting champions. But first, they had to survive high school.

Street Fighter High is a Web Video series that was created by Jennifer Zhang and released in 2010, depicting the cast of the Street Fighter video-game series (or younger versions thereof) as students in high school, going through the usual (and not-so-usual) trials and challenges of high school life. The characters aren't portrayed very faithfully as according to the actual series' canon, but it's all Played for Laughs.

The series has its own website where all the videos are placed, which can be accessed here

, and the videos are also available on YouTube (there, The Musical is split into two videos). It's also got a Facebook page, where updates are regularly posted.

Tropes present in the Street Fighter High series include: