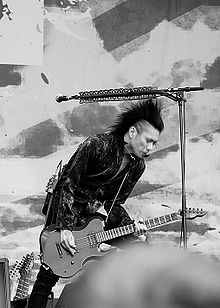 There is another famous musician named Die in Visual Kei - if you are looking for the ex hide with Spread Beaver keyboardist he is listed as Daijiro Nozawa. This page is about the Dir en grey rhythm guitarist.

Daisuke Andou, known by his stage name Die, is a Japanese Heavy Metal musician and songwriter, best known as the rhythm guitarist (and occasional lead guitarist) of Dir en grey. Unusually for a rhythm guitarist (who generally gets far less notice than the lead or even the bassist), he became immediately recognized as one of the most famous members of Dir en grey primarily via Memetic Mutation and the like.