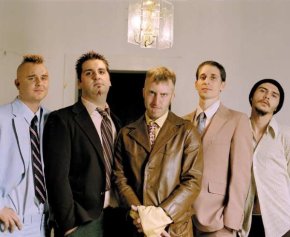 Dog Fashion Disco is an Alternative Metal band from Rockville, Maryland. Under their original name, 'Hug the Retard', they formed in 1996 by vocalist Todd Smith, keyboardist Jeff Siegel and drummer John Ensminger. According to Word of God, they changed their name because they thought it was too offensive and could cost them fans. Between then and their final show in 2007, they released seven albums (not including the EPs or live albums). Their subject matter included witches, lepers, serial killers, evil cults... You get the idea.

After they broke up in 2007, Todd Smith announced a new project, Polkadot Cadaver, which has a similar style to Dog Fashion Disco. They have released two albums; Purgatory Dance Party and Sex Offender.