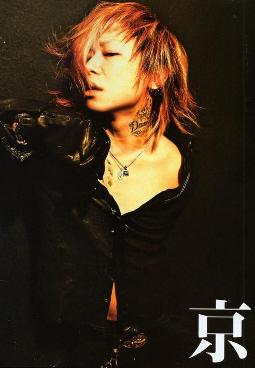 Tooru Nishimura (born February 16, 1976), who goes by his stage name Kyo, is a Japanese singer-songwriter and poet, best known as the frontman and vocalist of the post-Visual Kei heavy metal band Dir en grey. Prior to this, he has been a vocalist for the short-lived alternative rock band La:Sadie's and a roadie for the influential Visual kei band Kuroyume.

Kyo is widely known in the heavy metal scene as one of the most talented and versatile vocalists currently active; his style, which ranges from melodic singing to his signature unclean vocal style, combining guttural death growls, screaming and high-pitched shrieks. His frequent hospitalizations can be attributed to this vocal style: he has been hospitalized for hearing problems in 2000 (his left ear has remained partially deaf) and, in 2006 and 2009, received surgery for inflamed vocal cords. Of equal notoriety is his manner of performance, which involves plenty of shock elements such as fake (and real) vomit, convulsive-zombie-like twitching, large, open wounds of varying levels of authenticity, heavy makeup resembling corpse paint, and various acts of self-mutilation. However, he has recently toned down this violent stage persona.

Kyo writes poetry, and has released two volumes of poetry through the Media Factory label.