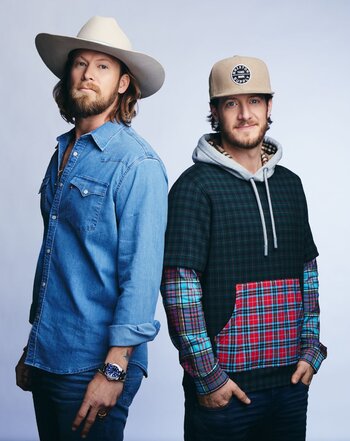 A Country Music duo consisting of Brian Kelley and Tyler Hubbard, respectively from Florida and Georgia. After making some initial noise with two extended plays, the duo achieved its breakout in 2012 with "Cruise", from their album Here's to the Good Times on Big Machine Records' Republic Nashville (now BMLG) imprint. Already a top country hit by year's end, the song only became bigger and bigger upon being remixed with rapper Nelly. With the country charts being retooled to include downloads, it ended up with a 15-week run at the top. The duo's next three singles — "Get Your Shine On", "Round Here", and "Stay", the last of which was originally recorded by Black Stone Cherry — have all topped the country charts too. Following those four songs, their debut album was released with some bonus tracks, including its fifth single, the Luke Bryan duet "This Is How We Roll". The album became one of the codifiers for the oft-derided "bro-country" trend; i.e., country music with rap and rock influences, usually about partying.
Advertisement:

Their second album, Anything Goes, dropped in mid-2014. Leading it off was the completely serious ballad "Dirt", which also topped the charts… after that, it was back to the bro-country with the hits "Sun Daze", "Sippin' on Fire", and "Anything Goes", only to return to balladry with "Confession". Dig Your Roots pushed ballads to the forefront, with the more serious "H.O.L.Y.", "May We All" (duet with Tim McGraw), and "God, Your Mama, and Me" (duet with Backstreet Boys). Following this album's cycle, they appeared on two duets at the same time: Morgan Wallen's "Up Down" and Bebe Rexha's "Meant to Be".

In February 2022, the duo announced they would be taking an indefinite hiatus.

The duo has written three singles for Jason Aldean.