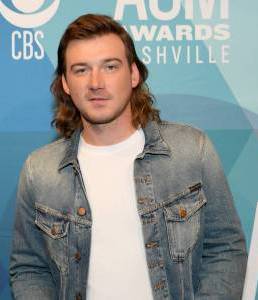 Morgan Cole Wallen (born May 13, 1993) is a singer from Sneedville, Tennessee.
Advertisement:

He gained his first exposure as a contestant on The Voice, but was eliminated during the playoffs. During this time he also released a self-titled EP via Panacea Records. It was a signing to Big Loud (a country label owned by Record Producer Joey Moi and Nashville songwriter Craig Wiseman) that got Wallen his big breakthrough. Although his first country song "The Way I Talk" bombed, he got an unexpected hit in 2017 with "Up Down", which featured Florida Georgia Line on guest vocals. Following this, both "Whiskey Glasses" and "Chasin' You" off the same album also topped the country charts, with the former even being ranked by Billboard as the biggest country music hit of 2019.

Wallen released several promotional and featured songs throughout 2019 and 2010, including a cover of Jason Isbell's "Cover Me Up" and a collaboration with Diplo on "Heartless". This was followed in 2020 by "More Than My Hometown" and "7 Summers", the lead singles to his double album Dangerous: The Double Album. The hits continued despite a widely-publicized controversy where he was booted from a guest spot on Saturday Night Live after being spotted hosting a huge party in direct violation of COVID-19 protocols.

Wallen became further entangled in controversy in February 2021 when TMZ leaked video of him shouting racial slurs at neighbors; following said leak was a severe backlash which saw his music removed from streaming services and radio playlists, along with a suspension from Big Loud. Despite this, he continued to hold the #1 position on Top Country Albums for much of 2021, and radio stations started reinstating his music by summertime.