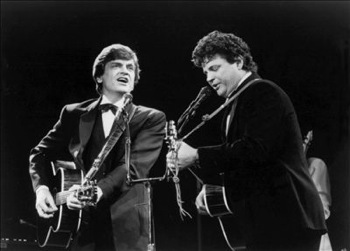 Isaac Donald "Don" Everly (February 1, 1937 – August 21, 2021) and Phillip "Phil" Everly (January 9, 1939 – January 3, 2014) were a pair of brothers and country-influenced Rock & Roll musicians who rose to great success in The '50s, and stood out with their powerful two-part harmonies: Don singing baritone, and Phil singing tenor. Incredibly influential, the duo were responsible for such notable hits as "Bye Bye Love", "Wake Up Little Susie", "All I Have to Do Is Dream", and "Cathy's Clown".

The duo was part of the inaugural 1986 class of Rock & Roll Hall of Fame inductees, and in 2001 were elected to the Country Music Hall of Fame.

Tropes associated with the Everly Brothers include: