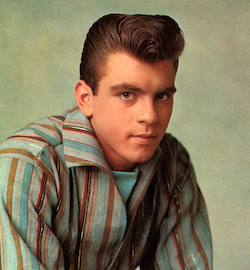 Fabiano Anthony Forte (born February 6, 1943), otherwise known as simply Fabian, was an American Teen Idol singer who rose to fame in 1959, on the strength of hit singles like "Tiger" and "Turn Me Loose." More notably, though, Fabian is an early example of what many would now call a "manufactured pop star"; a sex symbol presented to audiences without much regard for singing talent - which even fans of early rock & roll music will admit Fabian didn't have much of - through the sounds of the day, which in those days was rockabilly.

In a post-Elvis landscape - specifically, after Elvis joined the army - record companies were scrambling to look for the next big thing. As luck would have it, executive Bob Marcucci happened across a 14 year old Fabian, sitting on his front porch, after his father was taken off in an ambulance after a heart attack. Marcucci gave Fabian his card and offered to put him in the rock & roll business, but Fabian refused. However, his father came home and found he was unable to work. Wanting to support his family, Fabian relented. Marcucci wasn't deterred one bit by Fabian's obvious shortcomings as a vocalist, banking that his good looks and charm would make him a big name. In Fabian's words, "they gave me a pompadour and some clothes and those goddamned white bucks, and out I went."

While still working part-time at the local pharmacy, Fabian recorded his first single for Chancellor Records, "Shivers," which he disliked. However, the song raised enough buzz that it eventually got him an appearance on American Bandstand. The response to his appearance was massive, leading to a huge ad campaign for Fabian's next single, using posters that read "Who is Fabian?" and "Fabian is coming!" It paid off with some hits - "Turn Me Loose" peaked at #9, "Hound Dog Man" matched it, and "Tiger" went all the way to #3.

Fabian's fifteen minutes didn't last too long. During the payola scandals in the 1960s, Fabian testified before Congress that his vocals had been electronically doctored to "significantly improve his voice." At the age of 18, Fabian spent $65,000 to buy out his contract with Marcucci, and decided to concentrate more on acting, which he preferred in the long run. He'd had some acting experience in the movie Hound Dog Man, which was considered a flop, but he fared better in supporting roles, such as in North to Alaska.

Fabian occasionally still performs, but has never showed much desire to regain the level of fame he had for being in the music business. However, the whole concept of manufacturing a pop idol is still very much in practice over half a century later.

Tropes associated with The Fabulous Fabian! include: