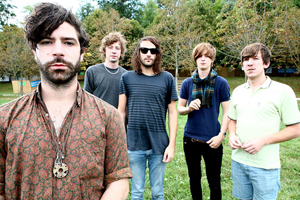 Foals L-R: Yannis, Walter, Jimmy, Jack, Edwin
Foals are an English Alternative Rock band from Oxford, known for their songs being used in the show Skins and the game Life Is Strange.
Advertisement:

Formed by Yannis Philippakis (vocals, guitar), Jack Bevan (drums), Jimmy Smith (guitar) and Edwin Congreave (keyboard, bass), they were founded in 2005 by former member Andrew Mears (along with Walter Gervers (bass) who left amicably in 2018) and had a really frenetic, Math Rock inspired sound. It remained that way until around 2010, when Total Life Forever came, showing a complete new direction in their music, much more Alternative guided (even Yannis' vocals were different from the yelped style of old). If this was good or bad, opinions diverge.