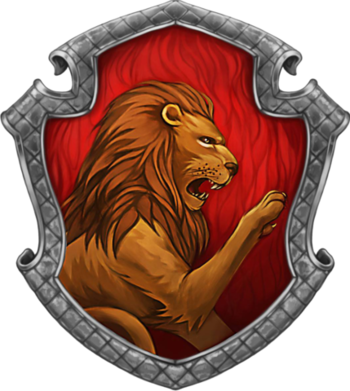 You might belong in Gryffindor,
Where dwell the brave at heart,
Their daring, nerve and chivalry
Set Gryffindors apart.
— The Sorting Hat

This Hogwarts House was founded by Godric Gryffindor and exemplifies courage and honor. Its colours are red and gold, its animal is the lion, its ghost is Nearly-Headless Nick, its Head of House is Minerva McGonagall, and it is associated with the element of fire. Most of the heroes in the series are Gryffindors, and their heroics cost their house as many points as they gain for their deeds. 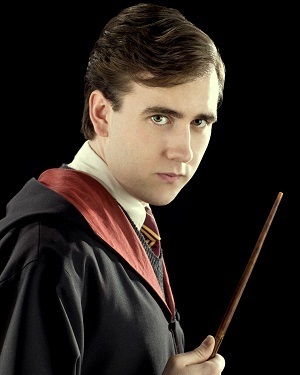 "We were all in the D.A. together. It was all supposed to be about fighting You-Know-Who, wasn't it? And this is the first chance we've had to do something real — or was that all just a game or something?"

A socially awkward, insecure boy who hides a painful past: his parents were tortured by Death Eaters to the point of permanent insanity and don't recognize him anymore. He is usually the Butt-Monkey of Harry's group. Like the protagonists, Neville appears in all seven of the books, with varying importance to the plot. When not at Hogwarts, he lives with an extremely outspoken (and frightening) grandmother, whom he often talks about. Eventually becomes one of Harry's closest friends, and goes through a lot of great Character Development to become truly awesome. 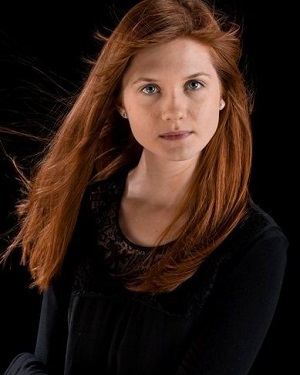 "The thing about growing up with Fred and George is that you sort of start thinking anything's possible if you've got enough nerve."

The youngest child of the Weasley family and the first daughter born to that line in several generations. Ginny has feelings for Harry, and has little dialogue during the first four books (because whenever the Sympathetic P.O.V. is near, she's struck dumb by his presence). In the second book, Ginny finally gets to go to Hogwarts... but as she has trouble making friends and feels quite lonely, she's an easy prey for Voldemort's Brainwashing through his diary.

From the fourth book onward, she starts displaying an actual and more open personality, revealing a variety of talents no one had ever suspected, and starts being popular with guys. By the sixth book, the situation has reversed: now it's Harry pining away in silence for Ginny.

Nineteen years later, she is married to Harry, with whom she has had two sons and a daughter. Prior to this, she also achieved her dream of playing for her favourite Quidditch team, the Holyhead Harpies. 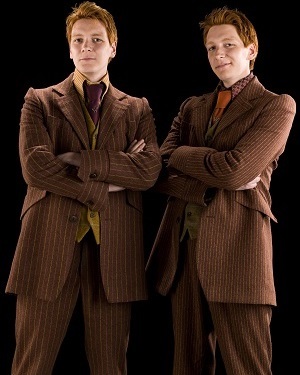 Ron's mischievous next-older brothers, Fred and George stick out for their constant wisecracking, penchant for practical jokes, and lack of educational excellence. They have been friends with Harry for almost as long as Ron has, since they are on the Gryffindor Quidditch team as Beaters. They later open a successful business selling joke/novelty items of their own invention.

Nineteen years later, Fred is dead, while George has married Angelina Johnson and has a son and a daughter. 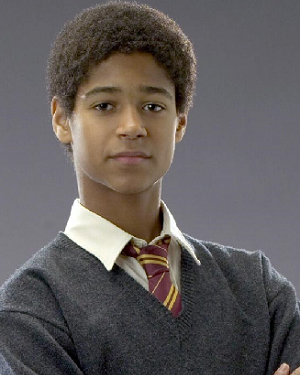 "We're fighting, aren't we? The message said Harry was back, and we were going to fight!"

"My parents are Muggles, mate. They don't know nothing about no deaths at Hogwarts, because I'm not stupid enough to tell them."

Dean Thomas is a boy in Harry's year who is popular and likes drawing. His friendship with Harry is strained in Harry Potter and the Half-Blood Prince, in which Harry feels insanely jealous because Dean dates Ginny. But after Harry and Ginny end up together, Dean is not bitter, and helps them in Harry Potter and the Deathly Hallows. He is a member of Dumbledore's Army and participates in the Battle of Hogwarts. 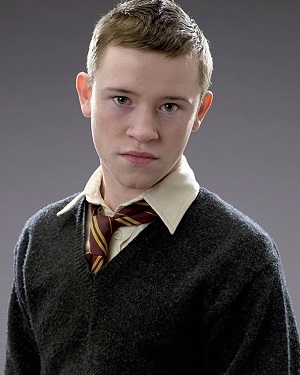 "I'm half and half. Me dad's a Muggle; Mam's a witch. Bit of a nasty shock for him when he found out."

"I don't appreciate the insinuation, Longbottom. Besides, if anyone cares to notice, my eyebrows have completely grown back! (Cue Seamus turning around and there is a noticeable bald spot on the back of his head)"

Another boy in Harry's year, and close friends with Dean Thomas. He does not initially believe Harry's claims that Voldemort has returned, instead opting to consider Harry insane, but he eventually comes around, apologizes, and joins Dumbledore's Army. He participates in the Battle of Hogwarts. His role in the battle is expanded in the final film. 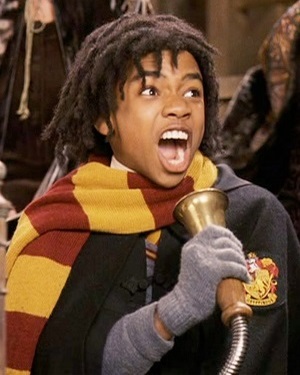 "And the Quaffle is taken immediately by Angelina Johnson — what an amazing Chaser that girl is, and rather attractive too—"

A boy in the same year as Fred and George and a good friend of theirs, being just as mischievous as they are. In the first five books he serves as the commentator for school Quidditch matches, being replaced by Zacharias Smith and Luna Lovegood in the sixth book since by then he's left Hogwarts. In the seventh book he hosts Potterwatch, an underground radio programme that shows support for Harry during Voldemort's regime. 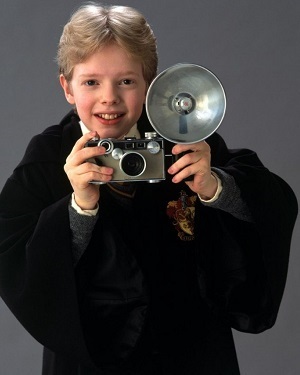 Portrayed by: Hugh Mitchell
Appears in: Chamber of Secrets | Prisoner of Azkaban | Goblet of Fire | Order of the Phoenix | Deathly Hallows

"Wow! Can you turn him around, Harry?"

Colin Creevey is a short boy in the year below Harry's who is a self-professed fan. He is always walking around with his camera, and wants to get Harry's autograph. He is targeted in Harry Potter and the Chamber of Secrets for being a Muggle-born wizard, and joins Dumbledore's Army. 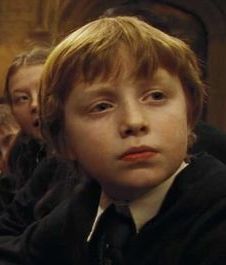 Nigel is a small Gryffindor boy who joined Hogwarts in 1994 and first appeared in Harry Potter and the Goblet of Fire. He is a big fan of Harry's, and tries to get his autograph. Later on, he joins Dumbledore's Army and participates in the battle of Hogwarts.

His character is an amalgamation of the Creevey brothers, of whom only Colin appeared in a film. 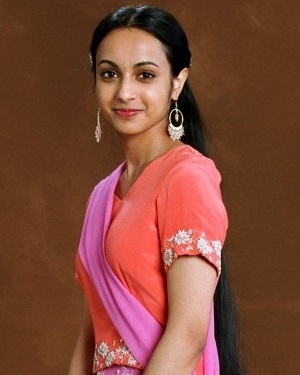 Parvati Patil is a girl in Harry's year whose twin sister Padma is in Ravenclaw. She is usually seen with Padma and her friend Lavender Brown. She is popular, and considered one of the best-looking girls in the year, but not as studious or serious as her sister (though not a bad student by all means), being usually more concerned with fashion - but she tends to be more sensible, intelligent, and centered than Lavender. Despite sharing a room with Hermione, the two girls are not close. She is Harry's date to the Yule Ball, which goes nowhere fast. She later joins Dumbledore's Army, and participates in the Battle of Hogwarts. 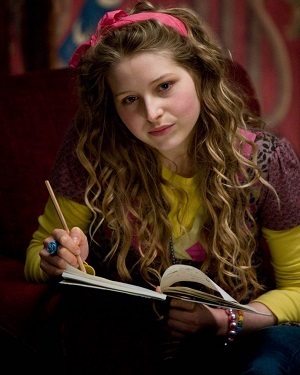 "I happen to be his girlfriend!"

Lavender is a Gryffindor in Harry's year who shares her room with Hermione and Parvati, but is closer to Parvati. She is frivolous and emotional, and does not seem to know magic very well. However, she becomes very interested in Divination, and also joins Dumbledore's Army. She remains peripheral until sixth year, where she manifests interest in Ron, who begins going out with her to spite Hermione. Their relationship declined after Christmas, and ended when Lavender realized that Ron would always be closer to Hermione. 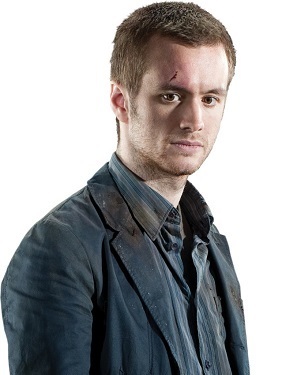 "I, uh, I don't really remember [my first match]. I took a Bludger to the head two minutes in. Woke up in hospital a week later."

The Captain and Keeper of the Gryffindor Quidditch team for the first three books. After graduating he joined Puddlemere United as a reserve player, and later participated in the Battle of Hogwarts. 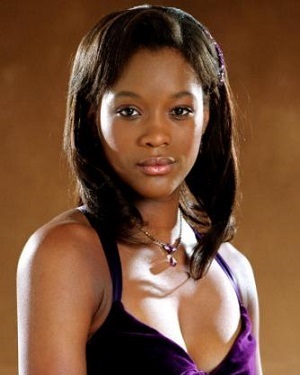 "Get back in position, she's fine! But as you're passing to a teammate, do try not to knock her off her broom, won't you? We've got Bludgers for that!"

A Chaser on the Quidditch team and Oliver Wood's successor as captain. She returns to fight in the Battle of Hogwarts. 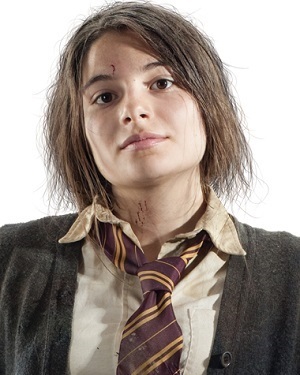 Katie Bell is another Gryffindor Chaser and a member of Dumbledore's Army. During Harry's sixth year, she is incapacitated by a cursed opal necklace that keeps her out of Hogwarts for several months. She graduates, but returns for the Battle of Hogwarts, which she survives. By the time of Harry Potter and the Half-Blood Prince, she and Harry are the two most senior members of the Gryffindor Quidditch team. 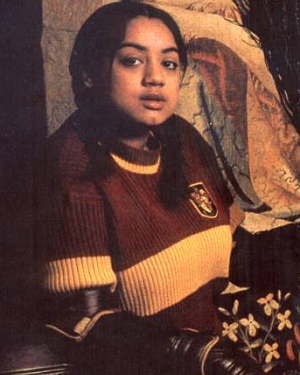 The third Chaser on the Quidditch team when Harry joins. Alicia joins Dumbledore's Army in her final year at Hogwarts, and later returns to the castle to participate in the final battle against Voldemort. 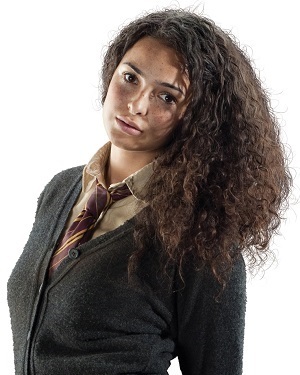 Romilda is a Gryffindor girl in a lower year than Harry's. She has a strong crush on him, and when she is introduced to the readers in Harry Potter and the Half-Blood Prince, she tries to get Harry to join her on the Hogwarts Express, but offends him by insulting his friends. At Christmas, she gives Harry some Chocolate Cauldrons spiked with Love Potion, which Ron eats, leading to his poisoning. She is a gossip, and does not think about things seriously. 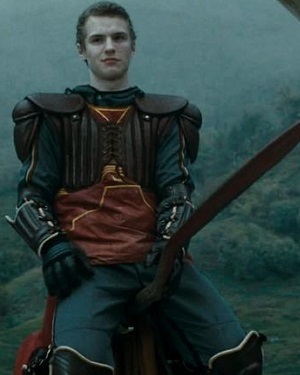 A Gryffindor boy one year above Harry. He is one of the few examples of a bad Gryffindor and embodies some of the worst aspects of the house, namely being a pushy, arrogant Jerkass. 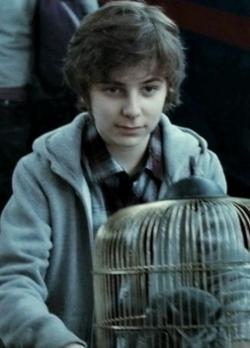 "I only said he might be. There's nothing wrong with that."

The first child and eldest son of Harry Potter and Ginny Potter (née Weasley). By the epilogue, James has already attended his first year at Hogwarts, and is now about to be accompanied by his younger brother (Albus) and younger cousin (Rose). He loves to rile up Al and has been noted to act very much like his namesakes and his Uncle Ron. 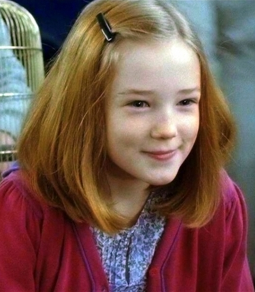 The youngest child and only daughter of Harry Potter and Ginny Potter (née Weasley). By the epilogue, she won't be going to Hogwarts yet, since she's only 9. So, she's very saddened about the fact. 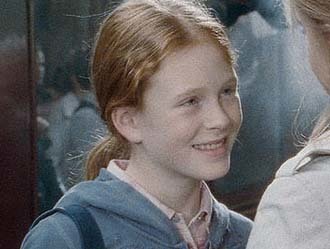 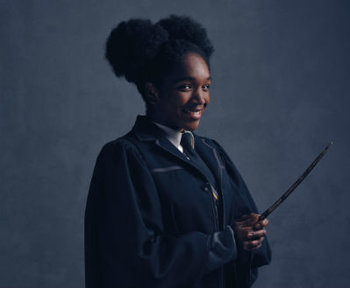 to see her in The Cursed Child

"Yeah." (To her mother in the last movie adaptation).

The eldest child and only daughter of Ron Weasley and Hermione Weasley (née Granger). She has been noted to be very much like her mother was at her age. Rose also has a close relationship with her cousin, Albus Severus Potter.