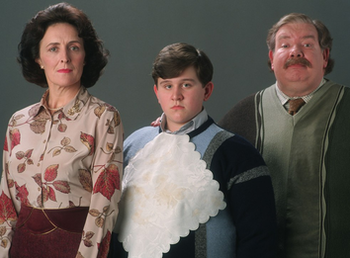 A Muggle family, and the only known living close relatives of Harry Potter. Due to Petunia's maternal connection to Harry, he was sent to live with them after his parents were murdered by Lord Voldemort. They raised Harry... with abuse and neglect, and maintained him in total obliviousness to his wizarding heritage, until the day he was sent his acceptance letter from Hogwarts. 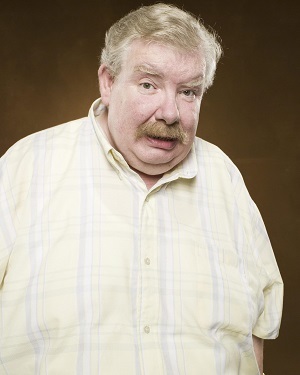 "He will not be going, I tell you! We swore when we took him in we'd put a stop to all this rubbish!"

Harry's uncle. Vernon is a blustering, social-climbing, materialistic Jerkass with an incredibly insular world view. Both he and his wife Aunt Petunia are very Roald Dahl-esque villains.

J. K. Rowling once cited him as her least favourite character in the entire series. And yes, this was after Lord Voldemort and Dolores Umbridge had been introduced. As for the fandom, let's just say you won't find many fanfics in which he wears leather pants. 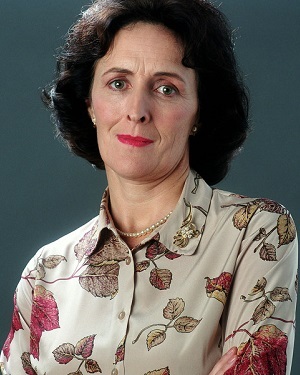 "My mother and father were so proud the day she got her letter. 'We have a witch in the family. Isn't it wonderful?' I was the only one to see her for what she was... a freak!"

Harry's aunt. As a kid, she was involved in The Glorious War of Sisterly Rivalry with Lily, Harry's mother. After Lily turned out to be a witch, Petunia got jealous and came to hate magic.

As an adult, Petunia is a Stepford Smiler who favours her own son Dudley over Harry. She is not as overtly nasty to Harry as her husband is, but she's still mean to him in a catty sort of way. She also tends to be humorously overemotional. 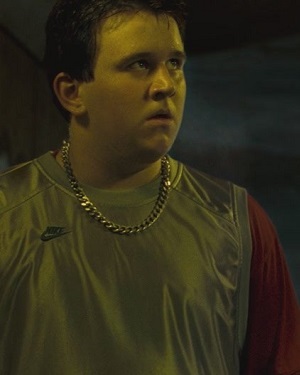 "Thirty-six?! Last year I had thirty-seven!"

Vernon and Petunia's beloved son and Harry's cousin. Initially, he's an overweight Spoiled Brat and the dim-witted leader of a Gang of Bullies who torment Harry. Of course, Vernon and Petunia turn a blind eye to the bullying and act as though Dudley were the perfect son. By the fifth book, Dudley has become an outright juvenile delinquent, but his parents remain oblivious.

After Harry saves him from a couple of Dementors, Dudley starts to change and ultimately he is the only member of the Dursley family to make a complete Heel–Face Turn, a development cut from the movies (though a scene was filmed). Rowling says he and Harry are on friendly terms as adults. 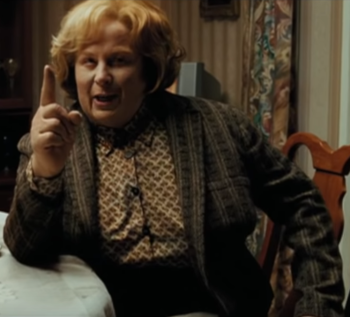 Vernon's sister, who visits the rest of the family occasionally. Marge lives out in the country, where she is a professional bulldog breeder. She does not know about the magical world, but nevertheless follows the Dursley "party line" of considering Harry and his parents to be freaks. She is not shy about expressing this viewpoint, although she has apparently never met Harry's parents first hand.

Marge only appears in Prisoner of Azkaban, although she is mentioned a few times in the first book and once in the fifth book. It is during her visit in Azkaban that Harry gets so angry at her for insulting his parents that he causes her to blow up like a balloon.

Appears in: Goblet of Fire note mentioned only | Half-Blood Prince

Voldemort's father and first murder victim. He was a wealthy neighbor to the Gaunts, Tom disliked Morfin and Marvolo Gaunt for their poverty, insanity, and hostility. However, this and Tom already having a girlfriend didn't stop Merope Gaunt from becoming a Stalker with a Crush on him. When Marvolo and Morfin Gaunt were imprisoned in Azkaban for crimes against Muggles, Merope took that opportunity to either brew a Love Potion and drug him with it or cast the Imperius Curse on him, using the infatuation it induced in him for her to trick him into marrying and conceiving a child with her.

Once she was pregnant with his child, she stopped giving him the Love Potion (or the Imperius Curse) and came clean about her being a witch, hoping that he had fallen in love with her for real and that he would stay for the child's sake if he hadn't. However, Tom, horrified by what happened and perhaps in disbelief, returned to Little Hangleton, "talking of being 'hoodwinked' and 'taken in'"... Unsurprisingly Tom Riddle avoided Merope from then on, never seeing her again; it's unclear if Riddle knew the baby was his. Merope went to an orphanage to die after giving birth to their child, who she named Tom after him before she died. Tom Riddle, Jr. was then raised in said orphanage, without the benefit of any form of parental love. Once Tom Riddle, Jr. finds out the details of his origins, he goes to the Riddle House in Little Hangleton and proceeds to kill his father and paternal grandparents. 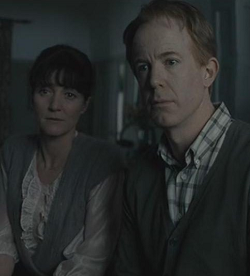 A pair of Muggle dentists and Hermione's parents. Throughout the series, they are almost entirely Out of Focus as Rowling believes they would be boring characters. Unlike the Dursleys, they are apparently accepting of Hermione being a witch.

Mr. and Mrs. Granger are best known for the instance in Deathly Hallows when Hermione gives them Fake Memories so that they will forget she exists and move to Australia, where they will be safe from Voldemort's reign of terror. This is only mentioned in dialogue in the book, but is actually portrayed onscreen in the movie version. Rowling states that Hermione returned her parents to normal after Voldemort was defeated. 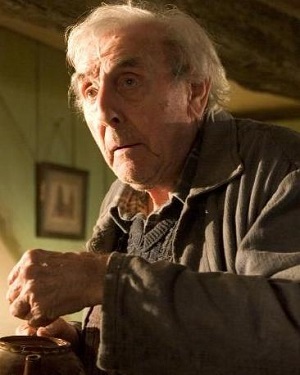 The old gardener of the Riddle mansion, where Lord Voldemort's Muggle father and paternal grandparents lived. He becomes a prime suspect in their murder by Voldemort, but is cleared of all charges due to the police being unable to determine their cause of death. He is murdered by Voldemort himself years later. He is mostly notable for being one of the few point-of-view characters in the series other than Harry, though his point-of-view is limited to just one chapter.

Appears in: Order of the Phoenix (memory)

The matron of the orphanage where Merope gives birth, Mrs. Cole is the one who helps Merope with her birth of her son, whom she names "Tom Marvolo Riddle" as Merope suggested. Dumbledore meets her when he goes there to inform Tom Riddle of his acceptance into Hogwarts, before meeting Riddle himself. Dumbledore eventually shows the memory of his visit to Harry in a Pensieve Flashback.

Portrayed by: Jason Boyd
Appears in: Philosopher's Stone (book only) | Order of the Phoenix