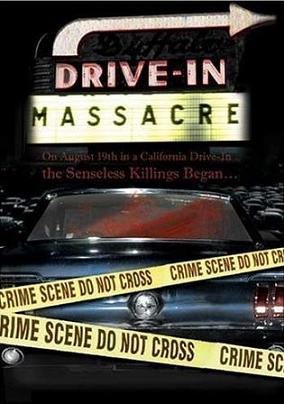 Tenth, actually.
"You'll pay to get in, and pray to get out."
Advertisement:

Drive-In Massacre is a Slasher Movie released in 1977.

In a small rural California town, a dingy local drive-in suddenly makes the front page when a teenage couple is brutally butchered there one summer night, the killer's weapon of choice appearing to be a sword, of all things. Put in charge of finding the maniac responsible for this atrocious crime are Detectives Mike Leary and John Koch, who quickly narrow the suspect pool down to three persons of interest:

As the detectives look into each of these oddballs, another double murder with the same MO (a lone couple mutilated with a sword) is committed at the drive-in the very next night, causing the police force to realize they are not just looking for a random murderer, but a vicious serial killer, one whose already short cooling-off period seems to be getting smaller and smaller. With no real clues or leads, and with the prime suspects all in possession of reasonable alibis, the case turns into a desperate struggle to stop the escalating killer before they commit an all-out bloodbath.

Having seemingly fallen into public domain, the film (which has not been terribly well received, having only a few defenders) is available in a number of those crappy bargain bin horror collections, and can also be viewed for free on websites such as Youtube.

Attention viewers, this is the manager speaking over the PA system, informing you that the film is about to start, and stars the following: