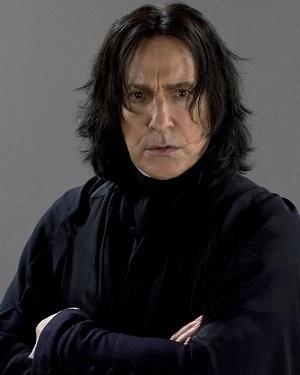 "I can teach you how to bottle fame, brew glory, even stopper death, if you aren't as big a bunch of dunderheads as I usually have to teach."

A former classmate of Harry's dead parents, Snape is now a professor at Hogwarts and the head of Slytherin house. While he's liked by his Slytherin students, and respected by his Hogwarts colleagues, Severus Snape is personally unpopular with the rest of the student body. Right from Book 1 and his first appearance, the Potions Master of Hogwarts develops an irrational grudge on Harry Potter and other Gryffindor students for reasons that Harry and his friends do not understand at the time, and this leads to much distrust, dislike, and antagonism from both sides with Harry and his friends often finding themselves doubting his true loyalties, motives, and alignment. Snape is Hogwarts' resident Sadist Teacher, unhappily teaching Potions instead of his ideal position, Defence Against the Dark Arts.

Snape's motives and true allegiance remain mysterious and murky until near the very end of the final book. As Dumbledore tells Harry, the reasons why he trusts Professor Snape is a matter between the two of them.