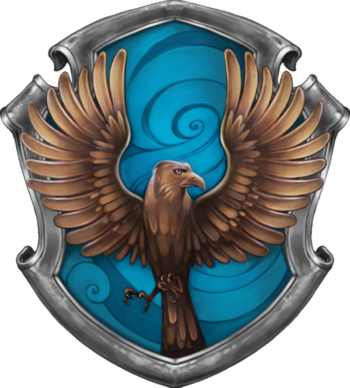 Or yet in wise old Ravenclaw,
If you've a ready mind,
Where those of wit and learning
Will always find their kind.
— The Sorting Hat

This Hogwarts House was founded by Rowena Ravenclaw and exemplifies intelligence and creativity. Its colour is blue and bronze, its animal is the eagle, its ghost is the Grey Lady, its Head of House is Filius Flitwick, and it is associated with the element of air. Ravenclaws prize perception and unorthodox thinking, but they also have a reputation for being ivory-tower intellectuals who do not dare to do enough and having little interest in looking out for each other. 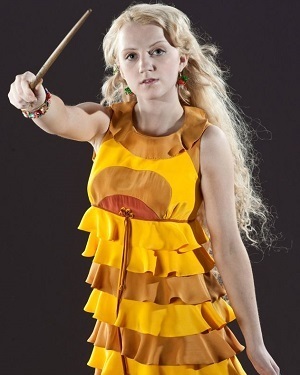 "[All] my shoes have mysteriously disappeared. I suspect the nargles are behind it."

A Cloudcuckoolander of staggering proportions, probably because her father edits the Wizarding version of the "Weekly World News." Rowling claims that she's the anti-Hermione, in that she thinks entirely by faith whereas Hermione thinks entirely by logic. Though an oddball often used for comic relief, she is also one of Harry's most loyal supporters and probably his closest non-Gryffindor friend, forming a secondary Power Trio with Neville and Ginny that leads Dumbledore's Army in Harry's absence. Has an uncanny ability to speak aloud what others are only thinking.

Nineteen years later, she is married to Rolf Scamander, grandson of the author of Fantastic Beasts and Where to Find Them, becomes a wizard naturalist and discovers new species of magical beasts (but not the Crumple-Horned Snorkack), and has twin sons named Lorcan and Lysander. 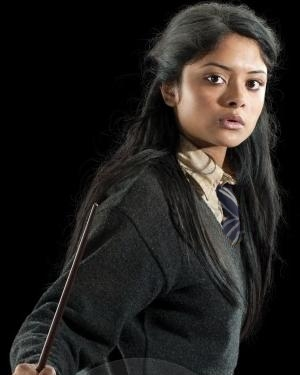 "Don't you look... dashing."
— To Ron on his ridiculous dress robes

Padma Patil is Parvati's more studious, but less gregarious, twin. She is Ron's date to the Yule Ball, but he does not want to dance with her, so Parvati and Padma dance with other people. She becomes a prefect, joins Dumbledore's Army, and participates in the Battle of Hogwarts.

Note: In the film, she is depicted as being a Gryffindor. 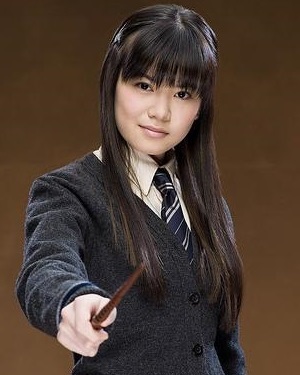 "I'll expect [...] she'll be feeling guilty, thinking it an insult to [his] spoiler Cedric's memory to be kissing Harry at all..."
—Hermione on Cho
Cho is the Seeker for the Ravenclaw Quidditch team. She becomes Harry's first crush, but a Love Triangle forms when she starts dating Cedric Diggory. After Cedric is killed, she seems to lose her popularity. She begins showing an interest in Harry because of his connection with Cedric's death, and he has his First Kiss with her. However, her grief over Cedric combined with Harry's own problems means they are unable to move forward and split up on bad terms.
Advertisement:
Roger Davies 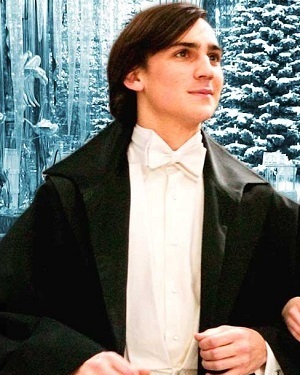 Portrayed by: Henry Lloyd-Hughes
Appears in: Prisoner of Azkaban | Goblet of Fire | Order of the Phoenix

Chaser and captain of the Ravenclaw Quidditch team. Very popular with the ladies.
Marietta Edgecombe

Appears in: Order of the Phoenix | Half-Blood Prince

"She's a lovely person really. She just made a mistake..."
— Cho Chang
A member of Cho's Girl Posse and apparently the only one to stick with her after Cedric's death. Cho dragged Marietta along to join Dumbledore's Army with her. However, Marietta was part of the crowd which believed Harry to be a liar due to the fact that her mother worked for the Ministry. After six months of keeping her silence, Marietta betrayed the D.A. to Umbridge, but ended up getting the word "SNEAK" written across her face in pimples due to a jinx Hermione placed on the parchment they signed. Rowling says the pimples eventually faded, but left a few scars.

In the film, Marietta is cut. Instead, the D.A. is betrayed by Cho herself, though not of her own free will.

A thin, nervous Ravenclaw whom Slughorn considers recruiting into the Slug Club, as his uncle Damocles invented the Wolfsbane Potion. Belby blows the interview, though, and does not appear in the club meetings. This is changed in the films, where he is seen at the Christmas party as a waiter, and not as a guest.

Terry Boot
Ravenclaw student. Member of Lockhart's Duelling Club. Joins Dumbledore's Army and, at the end of the fifth book, saves Harry from an attack by Malfoy, Crabbe, and Goyle. In the seventh book, he hears about the Trio's raid on Gringotts and escape on the dragon, and is beaten up by the Carrows for yelling about it in the Great Hall. He later participates in the Battle of Hogwarts.
Michael Corner 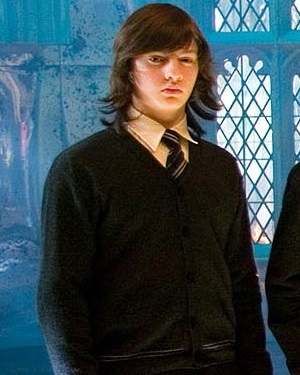 Ravenclaw student who joined Dumbledore's Army and in that school year dated Ginny Weasley. They broke up at the end of that year. Michael later dated Cho Chang and participated in the Battle of Hogwarts. He is described as having dark hair, and is credited in the films as "Slightly Creepy Boy." He is skilled at Potions.